Where is your place??? 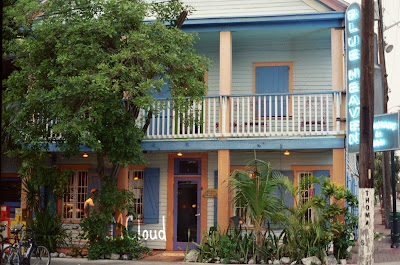 Have you ever been somewhere that speaks to your soul, creating a peace that seems to move beyond the quiet of the moment? Some believe that we each have THAT place- though some may not have found it yet, nevertheless, it is there just over a distant horizon.

Some years ago, I was invited on a trip to a small tropical island. It was beautiful! I was told exuberantly. It is out of time, it was claimed. I smiled knowingly, confident that what one called art was called craft for another. I would wait and see.

On first blush, the island was hot and steamy, reminiscent of a large microwave oven. Tourists stormed the beaches like Normandy. I was not impressed.

Our first evening we went to heaven... 'Blue Heaven' to be more specific, where I experienced my first taste of the magic at the end of the world: a small family owned restaurant. We sipped champagne under the palm trees as our hair swayed to the rhythm of the gulf breeze and roosters clucked by the table legs. An elderly gentleman plucked gently at his guitar and crackily crowed an oldie from the eighties as the waitresses valiantly asked "would you like soup or salad?" between his vocal improvisations. Laughter bubbled out of the kitchen and the wafting of BBQ'd shrimp made my stomach rumble with yearning. I sighed with a deep contentment as I took a final slurp...

That was it. I was home.

Welcome to Key West-- the end of the world
Posted by Danette at 11:12 AM No comments: Links to this post