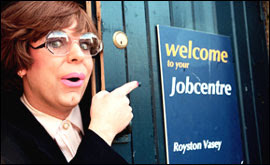 Some days the library is... some might say, "Exciting." But they would be wrong. Others might say "Interesting" But they also would be wrong. A more accurate description might be Aggravating or a Lesson in just how dumb and selfish people can be. I mean after all, how much of a fit do you really need to throw over a couple of dollars of fines for your free DVD rentals?
Frequent flyers in the library are generally only interested in a couple of things, and one of them is generally not books. But public computers at the library are a heavily trafficked area that people will wait in the cold for. And that is even more true in the difficult times we are currently facing with the official unemployment numbers still just under 10% (which doesn't account for those who have given up trying to find a job or college grads who have never found a job or are taking a job that they are overqualified for or those who are being underpaid for their jobs). So the library sees a lot of computer non-users who are trying to find a job. (I say non-users because most of the job seekers in the library are unfamiliar with computers and yet are forced to apply for even the simplest positions online because even Courtesy Clerks at King Soopers (i.e. Baggers) have to fill out their applications online.)
Occasionally, the job seeker is more literate on the computer but has been unemployed for some time and simply can't afford a computer or perhaps has disconnected the internet in an attempt to trim the household budget. Such a person approached the circulation desk today.
His initial request was for more time as the application process was taking more than the allotted hour. I added a half hour only to later find out he'd given me the wrong computer number and his time had expired while he was filling out the digital forms. Later, as he explained the whole problem he began expressing his frustration with his job search and added complaints about unemployment, how demeaning the whole process is, how long it takes to get a hold of the people in the unemployment office, etc, etc.. His attention then turned like a dog after a squirrel onto the current healthcare (non) reform bill that was passed Sunday by the corporately owned democrats in Washington. He was agitated that the government was interfering with insurance and forcing states to foot some of the bill- irritated that the government was interfering in people's private lives, for daring to curb the unfettered greed of the Insurance companies (as if...).

As he stood in front of me, taking advantage of the FREE computer usage and FREE DVD rental courtesy of  the taxpayers of Denver Co, complaining about the governmentally run Unemployment Office which he is having to deal with because he lost his job-- and lost his job, I might add, because of the poor economy which was driven into depression by the right wing policies of both parties, a system he apparently voted for he is then going to bitch about the healthcare bill??? The sheath of irony that swirled around his head was like a blizzard and visibility was apparently zero.


I wriggled uncomfortably in my comfy desk chair (which I covet for home use!) knowing that I was gagged from offering the answer he rightly deserved-- which was, "If you like this system and you want to continue to vote for the politicians who are mere puppets for the corporate hacks, who protect business interests while denying healthcare then I am for your right to starve to death!"
Posted by Danette at 8:04 PM No comments: Links to this post