A temporary fix & the 1st blogfest of the season (I think)

It was a risk, but I went through and deleted some of the pictures that I thought were extraneous which has fixed my picture problem for now. I probably shouldn't waste a picture to tell you that... 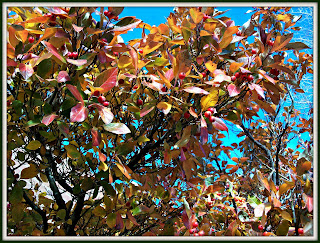 although this picture is representative of what the world looks like from my eyes. It's been a crazy warm October/November and December 1st was almost freaky warm. Tonight is the Parade of Lights here in Denver which is a big deal-- a Christmas extravaganza which could make the Grinches out there practically throw up at the festive excess. It's a parade of Christmas, for lack of a better word, stuff and some characters (Santa, elves, Rudolph and much, much more)- all lit up (go figure). It's a fun to attend- once or twice in your life. The crowds are ridiculous and generally it is absolutely FREEZING! No really, I mean, REALLY FREEZING!!! Frigid temps are as much of a tradition as the lights themselves. Except this year. It is a bit chilly but that's about it. Weird.
Tomorrow we're even going on a hike and a little jaunt into my favorite little nearby 'burb of Boulder. Should be fun.
And before I forget this week is the... 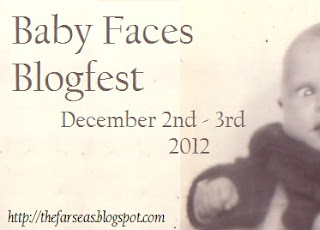 hosted by Trish over at WORD+STUFF What are the requirements?
You can choose to do one or the other or both, depending on your mood on the day(s). ;)

So here goes:
My mood to go down into the storage room under the stairs was completely spoiled by the picture snafu of the last few days- and it was no small thing! I would have had to dig around the boxes (buried you understand) of pictures and memorabilia just to find the book of pictures my grandmother put together for me some years ago. Then, I would have had to go to the library early to scan them into the system- all that without knowing whether I could even  post them or it. So no pictures, sorry Trisha! But a promise is a promise. I shall participate without the picture(s) and with one of the only (somewhat lame) stories that I know of from my early childhood:

I was about 2 1/2 when my younger brother was born but I guess I thought I was pretty big stuff, being a big sister and all. The house was small but apparently big enough that my mother had not heard the baby wake up (perhaps fussing about). I guess I decided action was called for and took thing into my own hands (and not for the last time, I will tell you now!). I climbed up the bars of the crib and lifted the 9.10 oz. lump of baby tininess and carried him to my mother. She of course panicked seeing me, probably barely observing the look of pride on my little face a stranglehold around the newborn babe (it was just rewards for all the trouble he later caused, I must say). And he probably looked a wee bit uncomfortable -not unlike this cat....

However, the little one survived and is today a 6'4" strapping old guy. I am sure it was my stretching technique that helped him become the basketball semi-good that he was (since height is critical in basketball).
So that's my story, and lame or not, I'm sticking to it!

Cheers Trisha for coming up with a such fun blogfest! And I hope you all stop by and see some of the other participants- not to mention reading Trisha's entry!
Posted by Danette at 7:13 PM 18 comments: