Life is best lived when we have passion for what we do and when there is passion in the relationships that we have. When our passions do not divide us, then we carry on mostly serene in the life that lies ahead. But for others, like Seamus, life has not dealt quite so clean a hand. Passions divide and severe them into fragmented beings. Finally a choice has to be made- and when the passion for one thing is so overwhelming that it distracts from all else then heartbreak will ensue.

When Laurel comes to Key West to "light back up the fires" of her relationship with her former lover, Seamus#, passion is aflame all over the island. For his part, Seamus is glad she's there but worries that he is unable to focus on his writing and is hesitant to drown himself in reunion. When finally Laurel proposes hearth and home with Seamus, he finds himself getting advice from Key West's high priced hooker, Savannah*, (who is really the Moon Goddess personified) under the tropical moonlight, who makes clear the problem, 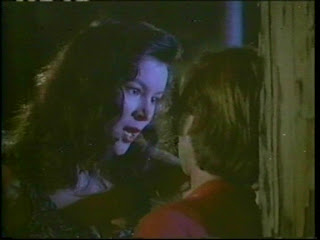 "Passion has a price but it can't be bought. Passion is a stern master. If you live in it's house, you will be it's slave." ~Savannah  in 'Less Moonlight' episode 4 of 'Key West'

Walking home after school, a busy-ish street.
Safe enough
A car heading to the curb, strange voice calling out
words are garbled, is he lost?
She moves closer, realizes he is communicating in a foreign language
but his exposure needs no translation
she stumbles back in horror and shame
runs home, hating the city,
hating her life...
Big City girl in the big city, twenty or twenty-one and alone. Choosing solitude
Familiar corner, familiar neighborhood
Her town
She parks, gets a magazine and plots her course.
She'll drive the twisting roads of... 285?
She opens the car door, jumps in, and starts the engine
nothing but blue sky and a beautiful day in front of her
She turns on the music
pulls the pins out of her hair
shaking the last of a long night's work
out of her curls

Pulling out onto the street
A hand comes up from behind, "pull over"
obedient, but defiant,
she stops
he fumbles with the seat latch
crawls out of the back
not waiting to see if he has a knife,
not wanting to know if he will come at her with a gun
thunk, thud, fighting for her life
she fights


then turns just in time
a car pulling out from a nearby drive
District 4 police station a block away,
car heading out on duty
sees her waving, pulls up in time to ask
"what's going on here?"
(is that what he said?
She only remembers pouring out that the man
had been in the back of her car, hand came up
told her to pull over...)
"She attacked me. She hit me in the back of the head! You saw that!"
Poor sad sack intruder
as he's led away in cuffs
Not the way she would choose
to grow up
to learn
to fight for herself
but nevertheless
she will learn she is
Strong Enough

(this is a true story-- I referenced the attempted carjacking some time back and had said I might blog on it but didn't want to just write the story... this is a better way to frame it because THIS is truer)

Posted by Danette at 2:00 PM 4 comments: Links to this post