That was then, This is now 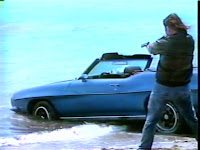 Last night we were watching our favorite television show, (can you guess?) 'Key West'. For the twenty or thirty-something time we sat and watched Seamus stand in stunned amazement at winning the lottery while babes in skimpy swimsuits jump up and down around him. He jumps in his auto and heads south to the place he's always dreamed of going- Key West, one of the homes of Hemingway and Tennessee Williams. In a moment of symbolic portent, he drives his car to the end of the world and into the water at the end of Highway 1 (Highway 1 does not really end at the ocean's edge but it's great for effect). Not content with the possibility that the car may have survived the attempted drowning, he takes a revolver out of his jacket and shoots his car, assuring himself of his intent to stay. 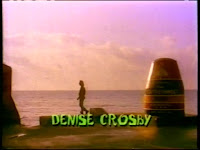 Seaumus's introduction to the island moves quickly from here. Jo Jo, a Rastafarian immigrant, takes him to the newspaper where Seamus meets Cole, the newspaper editor, and gets his first assignment. Then off to Gumbo's, the end of the world bar and cafe where he finds an enraged barkeep threatening his island tour agent (Gumbo and Jo Jo have a slight disagreement over the girls in the bar). And we meet Savannah, the personification of the sexual soul of the island. Savannah (played with finesse and gentility by Jennifer Tilly) meets Seamus and gives him a taste of what he is really encountering by coming to Key West- it's not just a tropical vacation land, as she says, it's "magic here. There are Angels in the Spray, Wizards in the Palm Trees, and Elves in the Sea Shells..." Later, she meets a client, a young boy whose father has hired her for his defloweration. Her words to him? "Today, you're gonna learn everything you're ever gonna need to know about women. I'm gonna teach you. And when you walk outta here tonight you're gonna have a Ph.D. in me. And your stock is gonna soar. And your self-confidence is gonna go through the roof." In yet another scene she goes to the home of a woman who was injured in a car accident to be the woman's body for her husband. It is positively electric to see her sensuality working it's own magic on the inhabitants of the little island.

I first watched this show in July of 2005 with Maurice. There was a moment that seemed faintly familiar but the newness of the show overshadowed the vague familiarity and I let the moment flutter past, a memory butterfly heading for the next shaft of sunlight. At a later date, however, the moment was so poignant that I nearly caught my breath, recalling a night years earlier (it would have been January, 19 of '93 although I could not have told you the date when the sensation occurred) when I had flipped the channel to the new little station, Fox, to see what they were airing from lack of anything better to watch. Initially I was probably intrigued by the woman sitting in the wheelchair, informing the beautiful raven haired vision that she had been in an accident and she wanted her (Savannah) to be her body. But the scene was so overtly sexual that my own, then suppressed and stifled, sexuality was immediately offended by the implications of what the woman was suggesting.

I do not feel that I can adequately explain to you what I mean by "suppressed". Being raised in a fundamentalist christian home is one thing but there was background that clearly influenced my upbringing-- background that I did not fully understand of at the time and some I just didn't know.

Christianity itself is afraid of sexuality. At all points in the history of the church-- and even earlier among the Jews-- the followers of Yahweh have demonized women and marginalized them almost beyond recognition. The historical background of this is delineated by Sue Monk Kidd in her book Dance of the Dissident Daughter in far more detail than I have time to do here, but suffice it to say that the male-god images in Christianity were a powerful metaphor for the domination of the male in the home, the church and in politics (which was integrally connected to the church). It is not insignificant that the church remains one of the final institutions where women are simply not allowed to hold certain positions of leadership. It is this very connection to the godhead that gives christian men an authority that moves beyond humanity and places any woman in an automatic role of subordination. What little girls quickly learn is that momma has no power, momma is a lesser species and DADDY is like god. When, like in my case, daddy could care less that there is a little girl underfoot and the mother is too young to know anything about raising children- who was still a child herself- the implications to her personage are profound.

Add to this, my parent's sinful start... Having been nabbed by the church in their indiscretion and then having to face the judgment of people who, if truth be told were undoubtedly engaged in far uglier behavior than a youthful moment of passion, and you begin to see why I was a less than welcome presence for a man who was trapped into marriage. (The implications of living life "in community" where you are put in the position of living up to the expectations of the people of the church is yet another topic for another day- but it is appalling to envision the young couple weeping and begging forgiveness from people that had no business being involved in the situation in the first place.)

On top of that, recent revelations revealed that my mother was sexually molested by her brothers. It is obvious that her fear of men and their passions (and possibly her own) helped shape the opinions she spouted in regard to men and marriage to me. Having never dealt with the reality of the molestation, (to this day her relationship with her brothers remains outwardly like anyone else's. In the name of "forgiveness" my mother pretended it never happened and thus exposed other women, including myself, in the family to the same abuses. While understandable considering the fifties were a suppressed age that finally gave way to the "free love" generation, her insistence today that she was noble for forgiving them, is somewhat appalling), she married a man who had been raised by parents who were smothered with fear of sexual sin and had raised a son who was sexually repressed. (I don't know if there are more secrets concerning this particular emphasis. Most likely there was more abuse.) At any rate, there were many prejudices that were passed on to me and I was handed this information without full disclosure-- even into adulthood. (Had I known the background of my mother's abuse, some of the hysteria she imposed on me might have been diminished).

At any rate, all of these influences lent themselves to shaping my identity and I developed a sense of repugnance for my own sexuality.

Unfortunately, sexual urges are not like alcoholism or drug addiction-- they are an appetite that is more akin to the need for nutrition to the body. And it really is with great effort that you subordinate it-- especially to the extent that I controlled it. I was determined that I would not be controlled in any way by sexual urges. And in order to do so, I had to eradicate any visual or even musical stimulation-- even books that were sexually suggestive were taboo with the intent of keeping my "thoughtlife" pure. Sexually suggestive jokes were forbidden and even a friend's sexual disclosures caused a rosiness on my cheeks that exposed my discomfort. I worked very hard to be as pious as a priest in terms of my sexuality. The fact that I even had sex with my X is really evidence of further control by the church-- having been reprimanded at some point that it is a wifely responsibility not to withhold sex, I felt it was a... "necessary evil" so to speak.

It was at this point in my life that I watched the woman speaking to her husband about the passion they had once shared and saw Savannah's hand brush the man's cheek (he was blindfolded). The scene then switched to a darkened room with a black woman hovering around candles humming, working her voodoo.

I changed the station away from the sinful scene, afraid to expose myself to the intensely carnal scene (nothing illicit is actually shown- the implication was enough) and the hint of black magic, I never darkened the doors of the Fox channel on Tuesday at 8 p.m. again.

Since that time, having watched the show so many times now, I have gained an understanding of the connection that Savannah has to the island. And in addition to that I have also reconciled myself to myself. I have learned that my own sexuality is not something to be ashamed or afraid of and I can watch that scene with genuine appreciation. In fact it is remarkable to see a woman in such an intensely sexual manner without the usual focus of a cheap slut who is there to titillate and tie viewers to the screen with the tawdriness of it. While it is difficult to understand the nuances for many, Savannah's sexuality is intentionally oppositional to the mainstream T&A we see on television. Her mocking attitude toward the prince and his "staying power" and the speech she gives the "cherry" is a role reversal. Her intention to teach the young man about women is a distinctly different role than the one the prostitute generally plays-- one of sex toy to a man who has no interest in the woman he is with let alone pleasing her! This is a sexuality where the goal is to "know" women and to have them follow the boy around because he treats them well. It's revolutionary-- even 16 years after it was first aired. (After all, sexuality on American television remains very juvenile)

This is now!
Posted by Danette at 8:16 AM No comments: Links to this post