You have to see the suave and handsome... 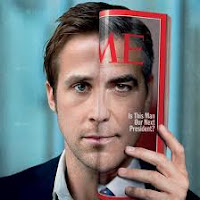 Ryan Gosling and George Clooney in...

The Ides of March
I go to (almost) every George Clooney movie expecting good things. Syriana was an amazing commentary on the morass that is US and Good Night, and Good Luck reminded us how much we have lost in journalism since the days of Edward R Murrow. So when we decided to go to The Ides of March on Friday, my expectations were, to say the least, over the moon. The movie opens up with handsome Steve (Ryan Gosling) standing on stage, checking microphones, and testing equipment before his guy (that would be GC!, woohoo!*whistles* ) gets on stage. The stage is then set for a political scenario that is predictable inasmuch as it is honest and timely. I don't want to give the story away so I won't tell you more than that about the specifics. Suffice it to say the new-found belief of Steve in his real-deal politician is put to the test and turns out to be unfounded. 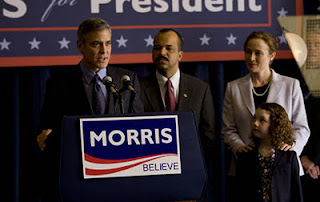 Although this movie didn't meet up to the suspenseful action of Syriana and was certainly not filled with the snappy dialogue or twisty intrigue of All the President's Men, it was nevertheless enjoyable from the films opening moments to it's too early closing. Clooney was great (as usual), taking on the roll of President with the ease of a man who was born to play the role. Gosling filled the shoes of the able-bodied third man on the totem pole well, reining in his frustration with a believable shift in loyalty that suits those who have been seasoned in the world of politics. Phillip Seymour Hoffman, playing Gosling's boss and Clooney's campaign manager, is so well suited to the role that he might be on the short list of candidates to head up the next democratic front runner's bid for office. The film was a bit short (as previously mentioned) and the corruption of the political process is shown in it's most brief and abbreviated form which was good for film but oversimplified the problems in Washington a bit, yet one walks away from the film feeling as though you have gotten a peek into the real world on The Hill. This is a must-see for those with an interest in politics, the idealist who still believes the political process is capable of doing more than maintaining it's own interest or a George Clooney fan! Hope you get a chance to see it before it leaves theaters because this movie is worth the $10.50 box office fee (it is unbelievable how expensive it is to see a movie these days!). You can watch the trailer and read more reviews (if you don't trust mine) at IMDb. 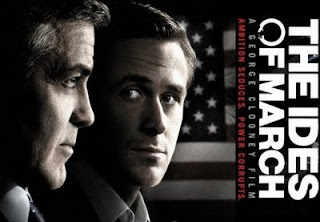 Posted by Danette at 6:25 PM 4 comments: Links to this post