I believe in Father Christmas

I believe in Father Christmas 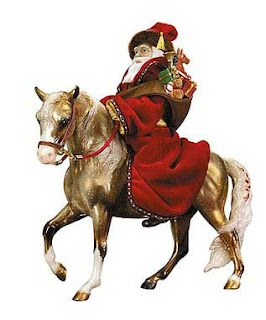 Hallelujah! Noel! be it heaven or hell
The Christmas you get you deserve
~ Pete Sinfield and Greg Lake
Posted by Danette at 10:00 AM 2 comments: Links to this post

Email ThisBlogThis!Share to TwitterShare to FacebookShare to Pinterest
Labels: Christmas 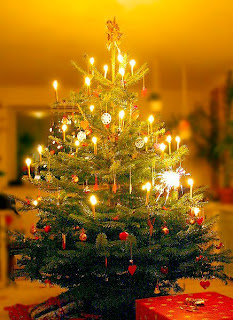 "The Egyptians were part of a long line of cultures that treasured and worshipped evergreens. When the winter solstice arrive, they brought green date palm leaves into their homes to symbolize life's triumph over death.

The Romans celebrated the winter solstice with a fest called Saturnalia in honor of Saturnus, the god of agriculture. They decorated their houses with greens and lights and exchanged gifts. They gave coins for prosperity, pastries for happiness, and lamps to light one's journey through life.

Late in the Middle Ages, Germans and Scandinavians placed evergreen trees inside their homes or just outside their doors to show their hope in the forthcoming spring. Our modern Christmas tree evolved from these early traditions." quoted from http://www.christmas-tree.com/where.html
Posted by Danette at 9:30 AM No comments: Links to this post

Email ThisBlogThis!Share to TwitterShare to FacebookShare to Pinterest
Labels: Christmas

Americans are not long on legacy. We do not value the time honored traditions and icons of our past. We are in love with NEW things and YOUTH is the pot of gold at the end of the rainbow. As a result we are missing out on a great deal that is beautiful about life.

Recently, a tradition was torn down not too far from where I live. A drive-in that had been in existence since drive-ins were the "latest" was torn down and an apartment building is now being erected there. Scrapping for space, the buildings stand back to back with a pleasant view of well-trafficked thoroughfares. On one side of the property, clinging to life, the marquis of the now dead and buried car theater lingers, a waning shadow of days gone by. It's graffitied front is a reminder of couples grappling in the backseats of '54 chevies, of families piled in station wagons, teenagers clambering into the bed of the pickup so they can lie on a mattress watching the large screen with the tinny dialogue of actors blaring from metal speakers that dangle on the car window. My son, an eleven year-old who has not yet been sold on the Need for New, the love of change or "progress", on our morning drive past the burial ground of family fun, nearly always looks at the new construction with disgust and comments, "Wasting perfectly good space". Undoubtedly the placard will eventually be utilized for advertising the new apartment's appeal to passers-by and a sad final nail will be put in the coffin of the drive-in theater's marker.

As an icon of American values it is more than symbolic that the Cinderella drive-in can be torn down without so much as a sigh from the populace. And it speaks to us poignantly, I suppose, that those things that are, in fact, uniquely American are held in no more reverence than the past from which many escaped to come to this country. For peoples who left their homeland in often difficult circumstances to start anew and who cling only to language and diet for their sense of culture it should not be surprising that American icons hold little or no significance. Perhaps the truth about American tradition is that tradition is despised, ignored and subservient to constant deconstruction and that our true tradition is leaving anything that ties us to the past behind and going after what pads the pocket book. All is subject to the tradition of greed in this country.

But this is a loss for us all. These cultural symbols, these unique institutions that do still linger in our midst, are more than archaic reminders of our youth. They are what give us a past, that connect us to our yesterdays and to each other. It is no coincidence that when the US invaded Iraq and began remaking that country that they allowed the dismantling of the museums and historic sites. It was their very intention to rob the people of that which lies at the center of their identity like a redwood's most interior growth ring, binding them to each other and a venerable narrative of civilization, beauty and grandeur. Without these ties, it is supposed, the people can be broken and remolded into a more complacent and compliant glob, loosely bound together by religious ties which ultimately keep them at odds and distracted. Now concerned, like their conquerors, only with their personal needs ("needs" being defined generously by the marketplace) they are capable of joining the ranks of humanity that are mere consumers. Americans.

Christmas is a specter of our past- a memento of a lost Atlantis that is quickly being extinguished by greed and marketing. Lame protestations about the commercialization of Christmas is simply not enough. It is up to us to fight, to protest, to do something different in order to keep the truth of Christmas-- to be like the Grinch, or Charlie Brown, or Scrooge and find the substance behind the facade, to grip the reality that there is more to life than getting more, buying more, having more, more, more, more. . .

Life really is finding meaning in the little things we do, holding onto memories of our childhood, clinging to tradition and
Posted by Danette at 7:11 AM No comments: Links to this post