Pour me another glass of champagne 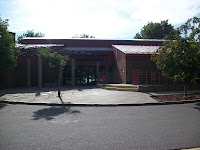 I occasionally mention the library where I am Lead Circulation Clerk (not a librarian). This means that I do lots of day to day organizational things and manage the work load to make sure everything gets done. I also get the joy of being the go-to person when a patron calls for "Someone Else Who Can Help Me." Some days there are very few problems- I mean really how many complaints can there be in a place that gives you stuff for free??? Well, there are also a few rules to deal with at the library, as we all know, so that's when we usually have Situations. And today was one of those crazy days (several times) but the most outrageous disagreement came when a woman came to return some books she had put on "Claimed Returns" (like it sounds, this means she told us at some point in the past that she had already returned them and that we had made a mistake by not checking them in).

She walked up to the desk (see picture below- that's not her in the purple dress) with her books and gave them to the circulation clerk. She said that she had returned them and they had been found on our shelves so she shouldn't have to pay the fines. Meredith (aforementioned clerk) did not believer her (checks the woman's card) and said that they could not have been found on the book shelves as we had done several searches. On it goes until the conversation becomes heated enough that the woman asks for "Someone Else..." So Meredith came to find me outside (I was on break). 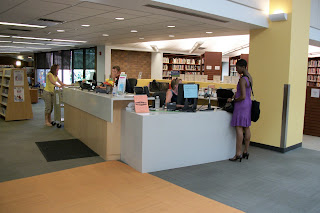 She explained the situation and I walked in prepared to be firm as I knew that we had looked diligently for the items (I had looked personally and remembered the search) "Sorry you have to pay the fines on books you return this late, we did a search here and did not find them," preparing my speech.

"You don't understand," the woman said wiping her eyes, tear-stained, obviously angry, "I was out of the country. My daughter returned the books. She brought them in and put them on the shelf. They were here."  Incredulous might be too tame a word for the moment. There's a little bell ringing in my ear as the words work their way around to the processing part of my brain, "Her daughter walked in and put them on a shelf in a library with 70,000 other books. Just randomly. And she thinks that is returning them." It made the lap about 3 times before I said, "but the books are here." (Aha! caught her, she's just making this up!) "Yes, I told her to come to the library last week and find them. Then I would bring them back to show you."


*deep breath* "Uh-huh. Well, I am sorry but you have to return them in a book drop or at this desk. We have one outside, one over there and you could also hand them to the people here or that one. But you can't expect us to be responsible for items that are just returned and put on the shelf. You are responsible for them until they are returned and they were not returned in the proper way. But the good news is, you are not paying for the books, you are only paying the late fines."


"It was too much," still adamant. "I could buy these books."


Three study books for nursing school, with CDs. "Nope, I'm sorry but these books would cost much more than $10 each. You can pay $10 a month or even $5 dollars but the fines are going to have to be paid."