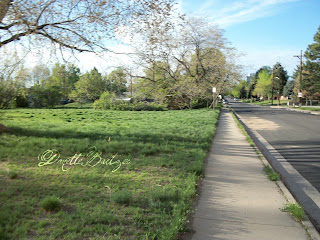 My family moved quite a lot when I was a girl. My Grandpa and Grandma's farm was the home port, the anchor in my childhood when I was moving (yet again!) to a new town. I went to stay for long stretches each summer but at the end of the long, hot, lazy days of eastern Oklahoma it was time to say goodbye to all my friends-- once more. It was never easy. 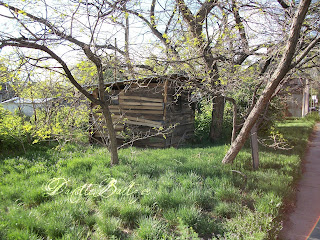 One particular adult friend used to say he hated goodbyes and simply refused to say it. He'd grin, give me a hug and say, "See you later, kid."
As I grew older, I had many more goodbyes (as do we all, yeah?)... Goodbye to high school friends when leaving for college. Goodbye to college friends when heading out into the "real" world, to grow up, have a life. As an adult, my friends would get jobs in other cities, grandparents passed away, etc., etc.
It's never any easier: leaving, coming, going, farewell, goodbye, passing by, see ya. 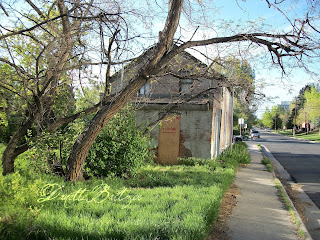 The big goodbyes are emotional hurricanes or tornadoes that leave a trail of detritus -uprooted trees, eroded shores, a changed landscape. The small goodbyes do not litter the yesterdays and todays with the same force but the horizon shifts nonetheless. 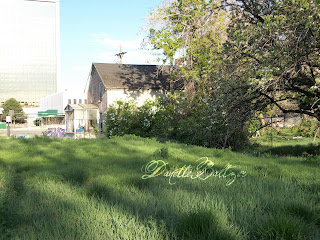 And then there are the goodbyes we don't want to acknowledge- leaving it to others to mourn, to adjust to burnt pastures.

But sometimes it is important to stop and give a nod to the passing of a stranger or the loss of an acquaintance- their lives were threads in the tapestry that makes up our lives. Recently two such people have passed away in my corner of the world and I thought I would pay tribute by telling you a bit about them. 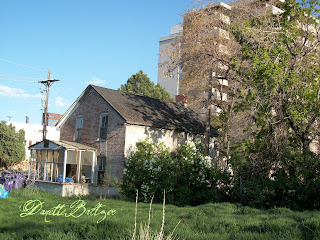 One was a shy but needy individual who visited the library almost daily and she called two- or three- or even four times a day with questions about her due dates, to order music, to double-check what she had checked out. Whether she had just been in to see us or not. Really she called to have someone to talk to. And we, those of us who work at my branch, were that someone.

We joked about her need, coarsely wisecracking that her quota of calls had maxed out like the limit of CDs she could take home. But when she stopped calling one day, stopped picking up her holds, stopped asking for receipts for items she returned and stopped asking, "could I bother you to check one more thing...", we wondered where she was, where was our shy bird who smiled in relief when you said more than a short "is this it today?",  who lit up when you asked her how she enjoyed the movie, the retro music?
When the word came that she had passed, even those least affected by her passing sadly gazed on the empty spot she once held in our little community.
Goodbye Laura Brazeal-Nudelman. 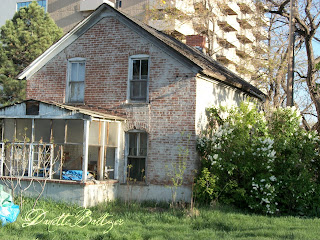 The other was a dotty old gentleman, as rickety as the house in my pictures. He rattled around the neighborhood, trash or some other treasure he'd found in the alleys and gutters bursting past the seams of the covered cart that rambled behind him.

I never spoke to him, shy (or suspicious?) of the outstretched hand, we'd been told to steer clear. Owns half the block, the landlord pointed. Stay off the land, he'll be after you, shaking sticks and making a fuss. Might call the police.  Even kids. (A nearby heart sank as visions of expeditioning the property were dashed.)
But rumors of his stubborn fight with the city were passed from one door to the next. 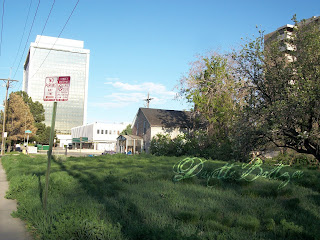 The city would love to take over his property, develop it. Probably put up a highrise amidst the glass monstrosities that reflect on to his unkempt yard. Get rid of the eyesore of a house. But he won't let go. Not Joe. He wants to screw The Man. Up yours! his boarded windows yell. Bugger off... the unhinged door squawks.

Till one day, he closed his eyes and they never reopened.

He was a fighter, that Joe. A man who wouldn't take the 30 silver coins to make the load easier. He'd rather dive for scraps than sell out to the movers and shakers. I never spoke to him, never shook his hand. But I admire him. He was a human among men- or perhaps better said, mice.
Goodbye Joe.
(It's never easy to say goodbye.)
Posted by Danette at 9:46 PM 19 comments: Links to this post

The days grow longer with the changing season and Apollo is in all his glory, majestically charioting to and fro across the sky. He gazes down at the earth... 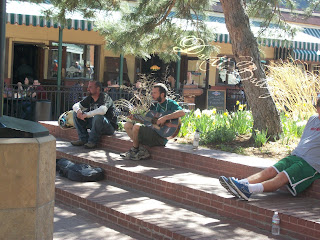 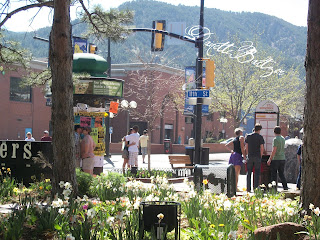 I bask in the Sun's embrace, my arms already browning from the amber warmth. 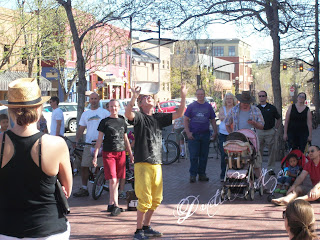 The cares of the week are behind me. The albatross of life's contracts forgotten. 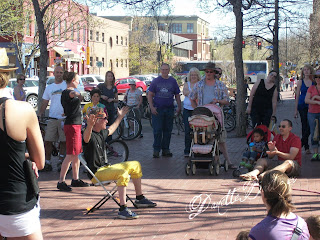 Even beloved indoor activities have no pull. Sitting in the shadows of a door and four walls has no appeal. 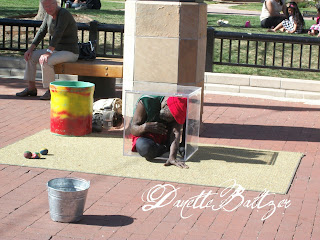 Time to get outdoors, hike the hills, walk down bricked lanes and dig into earth, it's toasty chocolateness soothing, tranquilizing. 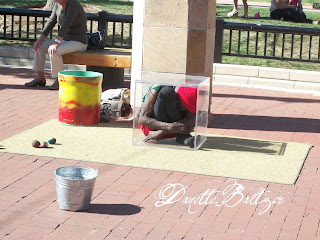 The entertainment is tailored to suit the outdoor environment 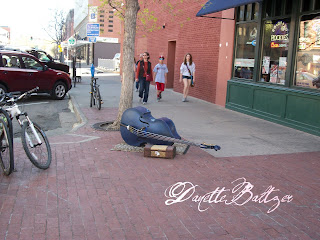 and the strolling crowds are anxious to be pleased. 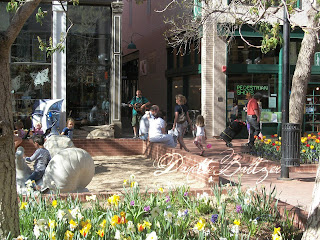 The rhythm of the conga invites audience participation... 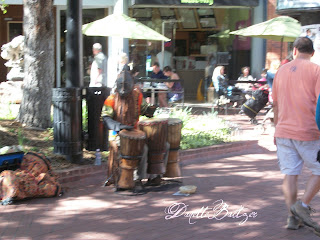 A celebration of the sun's trek toward it's zenith.

*Hi all! I haven't been getting much of anything done really: blogging, visiting you all and writing (this is about the most I've written for a week or so!) is taking the backseat as I head outside to enjoy our beautiful springtime weather. How about you? Are you finding the outdoors too tempting to get stuff done?
Posted by Danette at 2:49 PM 12 comments: Links to this post

In the sixteenth century the first tulip was imported to Turkey from Holland. I know-- I carried it myself. 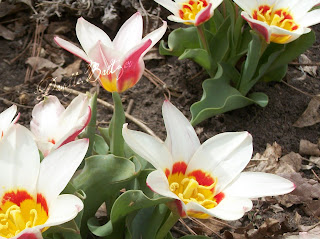 By 1634 the Dutch were so crazy for this fish-mouthed flower that one collector exchanged a thousand pounds of cheese, four oxen, eight pigs, twelve sheep, a bed and a suit of clothes for a single bulb.

What's so special about a tulip? 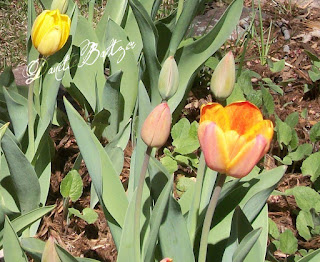 
When is a tulip not a tulip?

Tulips, every one-- and hundreds more-- each distinctively different, all the same. The attribute of variation that humans and tulips share. 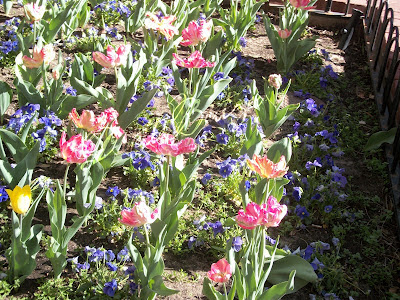 It was Key of Pleasure and Lover's Dream that I carried from Sulyman the Magnificent to Leiden in 1591. To be exact, I strapped them under my trousers... 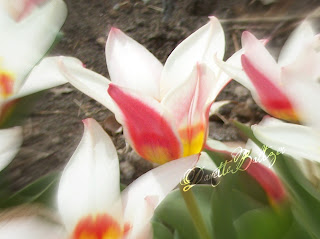 *(An excerpt from Jeanette Winterson's The Powerbook...)
Posted by Danette at 4:40 PM 16 comments: Links to this post