Yesterday was the first day of the official shopping season for Christmas: Black Friday for those of you who aren't versed in American lingo. We avoid the sale shopping frenetics and spend the day perusing ornaments. Over hill and dale, we shop for the perfect bobble, until we are blurred from from fatigue, we return home with trinkets for our tree. 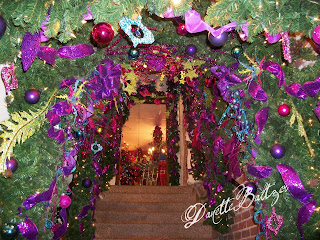 The Grinch would grimace at all of the sparkles and glitter there is to behold (as would Conchscooter),
but the initiation of Christmas cheer and good will is one we never pass up. 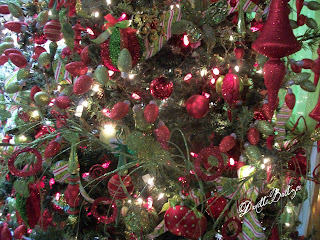 It is tempting to view the season as a glutton of solipsism or one that threatens to put us in a financial crunch because our obligation to give is focused on the shiniest, newest as opposed to meaningful. But if that's all it has become, then it is one that should be cast off immediately. 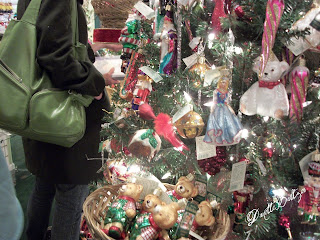 Gift giving should be the search to find the best gift for the person to whom one is giving and one that will make their heart light -not the gift that will impress them the most. And no mistake it is no small task to give a gift that is meaningful without bankrupting oneself.
Yet the toil is light when viewed from one's memory and one recalls the eyes lit up, the lips in a broad smile as the gift is lifted from the box and into the arms of the one it was purchased it for. 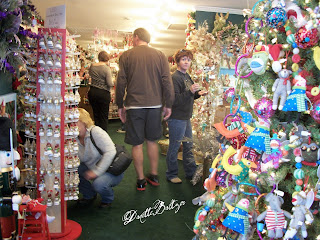 Truly, the right spirit of Christmas, as the Grinch came to learn, is about giving and sharing and thought for all we come into contact with.
So each year, we celebrate the first day by finding the perfect ornament to commemorate the day. The one that will remind us of the good will we experience during the season and the one which we hope will continue on throughout the New Year.

What traditions do you have that keep the true spirit of Christmas?
Posted by Danette at 10:05 AM 10 comments: Links to this post


November
So full of milestones
my birthday (today)
my son's birthday ( my youngest- turned fourteen on the 8th- OMG!)
Freedom Day (the day my divorce was finalized- the 3rd).
I missed Freedom Day this year with all the craziness
that tailspins me around from one thing to another.
My son's birthday was awhirl with life stuff (fourteen-year-olds will do some dumb stuff.)
And my birthday sandwiched between two days of work
Nevertheless
November is a lodestone
of the past
Mimosas and cheesecake,
favorite foods
Walking out of the courthouse,
dance-down-the-street happiness that it was finally finished
Son sleeping in my arms
trashcan close by to catch any upheavals
while friends eat cake and laugh in hilarity
Being dressed like a doll (I hate shopping!)
a fourth decade dragging me down,
reminding me of opportunities dried up and carried off the wind
Bearing down, pushing,
finding life altered once more with a bleated cry
Pecan pie eaten in a dorm room
Snowplowing my way home
a surprise blizzard gifting me with the day off (DPS hadn't cancelled school in 20 years!)
A slammed door as whispered conspiracies shut me out
exclusion burying the giggly companionship
Watching for a package laden postman (Mrs. Beasley in a box)
anxious nose pressed against the glass
Many more
Memories
carried in the leaf blown arms of
November
Posted by Danette at 9:15 AM 7 comments: Links to this post

With all the NaNo participants working away so diligently on their projects I am reminded that I need to spend more time writing. So, having been inspired by my NaNo friends, I am going to try to get more writing done and my posts are going to be a bit shorter -at least for now. 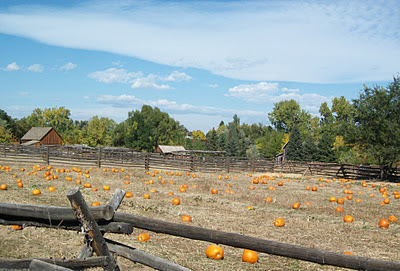 As the approaching holiday eeks ever closer (and in spite of what you might see at the stores, I am not talking about Christmas) I wanted to post this very Thanksgivingy scene. I'm gearing up, are you? I need to roast my pumpkin for my homemade pumpkin pie or it wouldn't be Thanksgiving. Any recipes you get out just for the day?

Posted by Danette at 4:45 PM 9 comments: Links to this post

IT seems wherever there are humans, the wildlife or sealife are threatened. I was visiting Bish at Random Thoughts and found out about another atrocious act done in the name of... what? Fun? Sport? Ugh! Enough already. Please check out the link below if you are as disgusted as I am by the senseless killing of this endangered species.


Starting on December 1st and going through March 31st, the British Virgin Islands permits a hunting season of Sea Turtles. We aren't talking about deer or rabbits here, people are legally allowed to harvest Hawksbill and Green Sea Turtles, both endangered animals. While there is a size limit (Hawksbill turtles must be 15+inches carapace length and Green turtles 24 +inches carapace length) these sizes mean they are still quite young as Sea Turtles go. And to top it off, Sea Turtles do not reproduce quickly. Only 1 or 2 of 1,000 hatchlings will grow to adulthood because as Crush (Finding Nemo) explains it, "The little dudes are just eggs, we leave 'em on a beach to hatch, and then, coo-coo-cachoo, they find their way back to the big ol' blue." At least some of them do. But it takes 10-20 years before a turtle can even lay eggs.

(There is a moratorium on loggerhead turtles, leatherback turtles, & all sea turtle eggs.)

Posted by Danette at 9:57 PM 6 comments: Links to this post

A castle of dreams

It stands, a monument of time and days gone by, a deteriorating reminder of love, loss and tragedy. 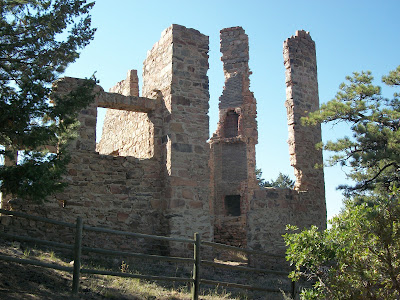 Built for his family in 1909 by the West Virginia transplant John Brisben Walker, it was meant to be a haven, a treasury of laughter and vivacity that would call the family back to it's hearth in times of trouble. 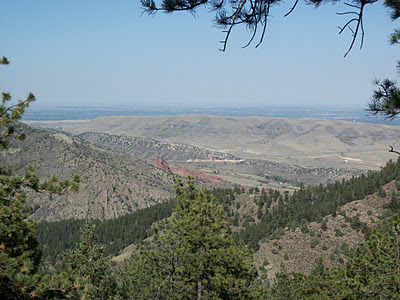 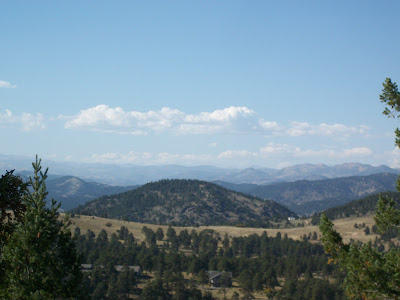 and the stalwart Rocky mountains on the other, it is no wonder that the entrepreneur chose this spot for his private domain. 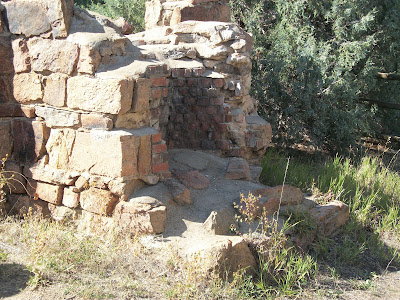 Sadly, the castle walls had not time to settle before Walker's wife and partner was taken from his side, leaving him bereft on his mountain aerie. 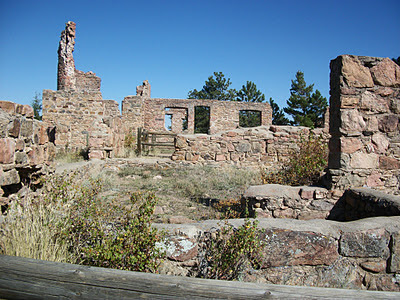 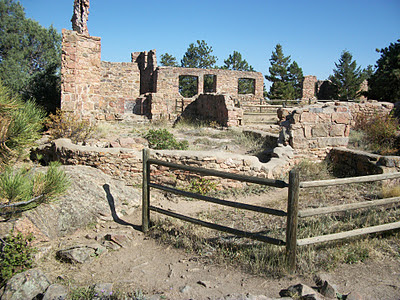 Packing up his four motherless children, he abandoned the charred remains of the hideaway and extinguished his plans to build a summer home for the President on the neighboring high point. Having lost another fortune and with WWI darkening the horizon, he left Colorado for the last time. And though his successful ventures had given him the means to build his dream home on Morrison Mountain, John Walker lost his golden touch and died penniless at age 83. 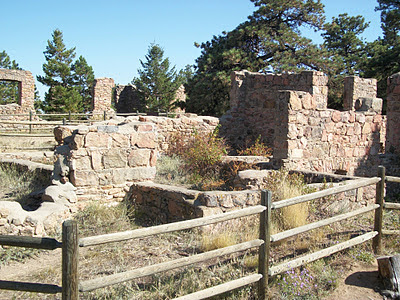 The foundation of the house still remains, beckoning hikers of all ilk who wish to behold the stone tribute. Fortunately not all of the businessman's schemes were reduced to ash. It was because of his vision that the Denver Mountain Park system was established and it was his land purchases that founded Jefferson County Open Space which has given pleasure to so many Denver & Jefferson County Residents. 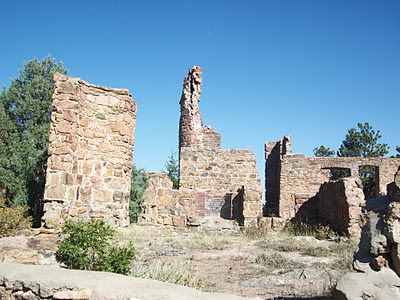 Canopied by azure skies, you will find a quiet dignity dwells in the broken walls and tumbling chimneys.
And if you pause to lend ear... 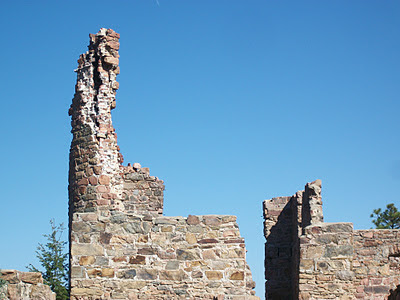 the whooping of children playing amidst the trees, the call of a mother to come in for supper and the echo of a father's footsteps descending from his observatory can almost be heard by those willing to listen.
Posted by Danette at 8:13 PM 9 comments: Links to this post

The dance of the Starlings

The standard collective noun for a group of birds is a "flock" but for many types of birds there is a collective noun particular to their type.
A peep of chickens
A murder of crows
A flight of doves
A charm of goldfinches
A parliament of Owls
and...
A murmuration of Starlings
and this is what they look like as they settle in to roost at night:


Another video with the amazing dance of the Starlings.
Posted by Danette at 9:45 PM 7 comments: Links to this post

So you may have read here at one time or another that I get seasonal depression (it used to be pretty severe- now it's not as bad). That is part of the reason I don't like winter and one of the reasons Key West is so attractive me. Though Colorado is sunny quite a few days of the year, the short winter days still carry me to the brink of depression and the cold only makes matters worse. It all sounds pretty grim but...

There have been some interesting studies done at UCLA that may be hold some good for people who suffer from Narcolepsy and a sleepiness associated with Parkinson's and it might also mean some good news for anyone who suffers from seasonal depression! Researchers at the university have identified the group of neurons that mediates whether we respond to light by becoming stimulated-- or not.

So the long and short of the study is that in the hypothalmus (an area at the base of the brain and is responsible for control of the autonomic nervous system, body temperature, hunger thirst, fatigue, sleep) there are cells that release a neurotransmitter called hypocretin. In a study with mice, those with hypocretin showed an intense activation of the cells (but not in the dark!) while those without it were unable to stay awake even in bright light. And it is this loss of hypocretin that causes chronic sleep disorders. So, by introducing hypocretin (or boosting it) they will be able to increase the light-induced arousal response while blocking them will induce sleep. Jerome Siegel, a professor of psychiatry at the Semel Institute for Neuroscience and Human Behavior at the university noted, "The administration of hypocretin may also have antidepressant properties, and blocking it may increase tendencies toward depression. So we feel this work has implications for treating sleep disorders as well as depression." Since seasonal depression is connected to light stimulation, it seems likely that these results could have some very positive results for those of us who get the winter blues!* 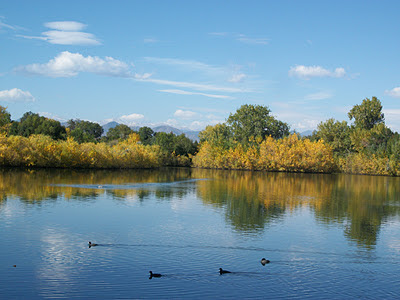 Could be blue skies ahead for those who suffer depression!!!

*See the whole article at Science Daily. Brain Cells Responsible for Keeping us Awake Identified.
Posted by Danette at 9:05 PM 6 comments: Links to this post