There are moments when words fail, when anything you try to say or express will only marginalize the feelings that you have. Or you are simply unable to express any kind of feeling because the feelings are too strong. It may be a glorious sunset which chokes the emotion and stifles your voice. Sorrow too can bury words so deeply that they are unable to find their way to the surface.

It is one such moment that we witness in this week's episode of Key West. In 'The Greening', three separate story lines tell of the character's moments of reckoning. Though it is not the show's most sterling of quarter hours it still manages to show an intention for maturity that surpasses the average "this-is-how-we-have-a-perfect-life-in-forty-five-minutes" television formula. For Seamus, his high school buddies come to town and attempt to lure him back to the life of "streaking and mooning... passing out together" and as the Sheriff wisely points out, for your friends "much sowing is left to be done". For Savannah... (the moon goddess I introduced in a prior post) she meets her knight in shining armor only to recall that the life he offers is not synchronous with the life she lives. For both, there is a moment where who they are stands out in stark contract against what is being offered. And in spite of the seduction of this other life, they have to be true to themselves and honest with the people they love (or are falling in love with, in Savannah's case) and say farewell.

But in a third narrative, the city's mayor is having a reckoning of her own. As an audience in the know, we learned in first episode of the season that the soon-to-be Mayor Chaucy Caldwell is an alcoholic. Although her opponent's homosexuality is used as fodder for political gain, her secret is kept safe from public scrutiny. And for this once television reflects real life, the mayor's alcoholism doesn't disappear (hear that Charlie Sheen???) from view. She wants so badly to just live life- have a beer while watching  a football game or celebrate with a glass of champagne on New Year's Eve- that she has a drink. Not a big deal right? Unfortunately a drink is not a drink for an alcoholic and Chaucy is headed for a crisis. After her Aid confronts her and she leaps into denial (not the river!), she finds herself alone with a bottle of Cromart whiskey and a glass. She knows who she is and what alcohol can do to her life but she also knows how badly she wants a drink. So here is her moment...

Not a word is spoken as she curls up on the couch, bottle snuggled closely to her chest, tears and the inner conflict between what lies behind and what is ahead... 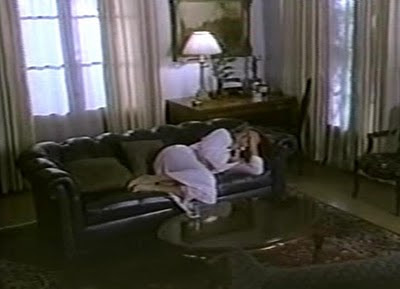