Mutiny on the Bounty

I used to soak in old movies like a sponge. The elderly who come to the library are often surprised when I rave about how much I love Grace Kelly (so beautiful and stylish!) or Carole Lombard (so funny!). Thinking perhaps that I am mocking, a suspicious eye might be cast but then I will mention another film and we'll ramble for a bit (Oh, did you see Audrey Hepburn in 'Wait until Dark' So brilliant!) about other great movies until they leave feeling that they have met a friend along the way (I hope, anyway). Anyhow, my favorite oldies channel, AMC no longer really shows old movies they way they used to (although they do show 'Madmen' and 'The Walking Dead' so I'll forgive them) so now we often dig them up at the library. Tonight, Mo chose Mutiny on the Bounty with Marlon Brando. I usually can't really watch Marlon Brando without thinking of Sayonara which is my favorite of his but I overcame that tonight and allowed him to be the dashing master's mate on the seafaring Bounty on it's way to get breadfruit plants. They were travelling to Tahiti so they could transplant the plants then transport them to the West Indies where they would be grown and harvested for cheap food for slaves. A noble mission, aye? Anyway, according to the movie and legend (which by the way is based on a true story although whether the captain was as terrible as he was made out to be is still under debate), the ship's captain Bligh was so cruel that the men rose up in mutiny and cast him off the ship to finally paddle his way back to England while the mutineers...??? Well, I will leave that for you to find out. 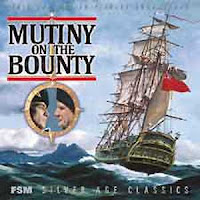 The movie is a sweeping adventure in true old Hollywood style. Brando is picture perfect, handsome and debonair. He argues for the dignity of the underlings on his ship in a way that makes you hope that he's on your side when your boss acting the overlord. (He'd be out there with OWS if you ask me!) He falls in love with a beautiful Tahitian princess, which is predictable but sweet when she hangs in there with him after he loses the will to live post-mutiny and feels the full weight of what he has done (no one does depressed like Brando). Anyway, it was yet another great old film, complete with orchestrated Overture and Intermission (I can't imagine audiences today sitting still while there is a screen with a simple message "Overture" and 4 minutes of orchestration goes on. Imagine the din of talking!) with beautiful scenery and an epic story. A great way to spend a cold wintry evening (and it's definitely wintry here. We had at least 3 inches of snow Wednesday night- I think it was more and I was the one scraping the car this morning. ARGH! I'm not ready for winter yet!!!!!) 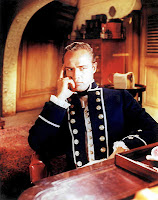 Memorable quote: "I believe I did what honour dictated and that belief sustains me, except for a slight desire to be dead which I'm sure will pass."
Posted by Danette at 10:49 PM No comments: Links to this post