Have you seen it? Don't tell me what happened! I have to watch it On-Demand so I didn't get to see it last night... know what it is? The only other show I am quite mad about other than 'Key West'... What is it you ask? You have to have heard by now-- it's been all over the press and won two Emmy's. But better yet, the critical reviews have been fabulous. The American Film Institute awarded it best television series in 2007,8, 9 & 10 and the Television Critics Association named it the best television series in 2007. Its genius lies in not being a Hallmark Family show with a "lessons well learned." When Rolling Stone's Rob Sheffield said "Don Draper's a quintessential fool... Every American wants a clean slate, but nobody wants to lose what they've got... Don Draper, as the greatest of scam artists, the one who never fails to seduce the rubes, is also the biggest sucker of them all... this guy believes in Hollywood happy endings... and if Don Draper falls for his own promises, what hope is there for the rest of us?" he nailed it. That's is in a nutshell. Don Draper has a little bit of our whole schizophrenic society inside of him. So tonight I am going to be watching (drum-roll please!) 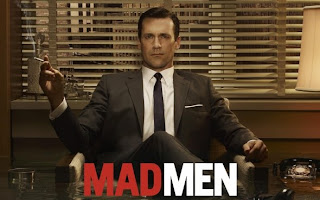 In case you haven't seen it, you might want to borrow the first four seasons from your local library or rent it from itunes or Netflix (I assume they have it). If you jump in now you'll have missed a whole bunch of the story that just won't make the madness complete. 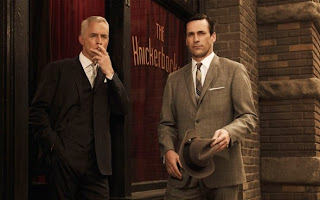 But just as a little teaser I will remind you that when we last saw him, Don Draper was in bed with a dark-haired woman whom he barely knew. She was his stand-in secretary after the old (and I do mean old!) one passed away, sitting at her desk (yup, you can't kill anybody off any funnier but still sad than that!). After the nanny was unceremoniously dumped (by his bitch of an ex-wife!) he invited her to California to watch the children while he completes some business. The attraction was obvious and by the end of the trip he had given her an engagement ring he had been given by... well, that's all part of the backstory that you will want to catch up on.
So will the two virtual strangers get married?
Will his ex-wife decide she wants him back, dump her new husband and make a play for her soon-to-be-married-ex-husband?
And what happened with Jane?
Is she keeping the baby?
Will she renew her relationship with Roger (her former ex-lover boss?)
And what about Don's daughter? How will she survive the dysfunction? (probably just like all of us from dysfunctional homes did)
How will the madness go on???

I don't know! I have to go watch and see!
So what are you watching? Anything as gripping as the advertising men of the 60s?
Posted by Danette at 5:38 PM 13 comments: