The oil volcano in the gulf continues unabated. BP is doing all it can to keep from being held accountable for the oil that is polluting the gulf by keeping scientists and, indeed, journalists away from the worst scenes there or calculating any real damage as vague numbers and facts are easier to dispute in court. The Huffington Post and Firedoglake both continue to cover the disaster with all it's ugliness althoug it's lost it's sensationalism for the larger networks. I guess ABC did their bit for humanity when they sent Phillippe Cousteau into the murky waters.


Today's headlines features such tidbits as BPs claiming that workers are largely sick because of the heat- NOT because the toxins in the water from the dispersant is making them sick.

Dolphins are also catching headlines. Even the government realizes their plight is an emotional issue and NOAA has sent out an email informing the public what they can do to help the dolphins: 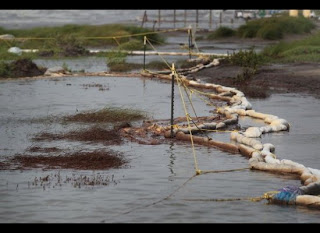 In addition, an underreported story on reporting in the gulf. Last week Deepwater Horizon Response sent out an email advising the media that there were new "safety zones" set up for their "protection" and any violation of these zones could result in jail time and fines. CNN and the Huffington Post picked up on the story here and here. Salon .com also has a posting but by and large the story has been widely ignored by mainstream journalists (I suppose they appreciate the concern the government has for their wellbeing) but even the Huffington Post is not giving this story the attention it deserves. I guess it's okay to put the workers in harms way but we wouldn't want to expose any journalists to any dangers!
In addition, NOAA released this map showing the likelihood of coasts that will be affected by the oil: 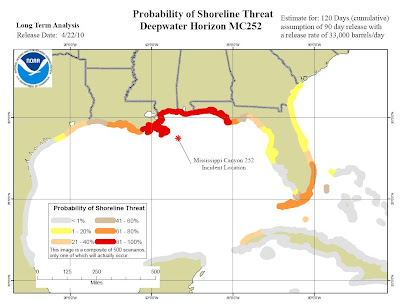 I think the question that needs to be asked is:
Will the pleasure never end????
Posted by Danette at 9:25 PM 1 comment: Links to this post