The triops were initially a birthday gift that wound up being a science experiment in what not to do. They lived for a few weeks but the water temperatures varied, then dried up and the food was probably too sporadic so they quickly died. For Christmas, a new tank was purchased with a water heater and a plant for sustenance when a meal was skipped. Which reminds me... time to feed the triops. Excuse me... * 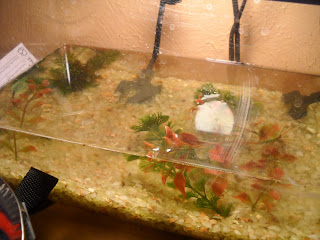 When they were small, they were fed every other day or so and the food had to be smashed up. Now that they have grown to a distinguishable size, they eat two pellets each, twice a day. When the fishy spheres are dropped into the water, two of the prehistoric crustacean propel themselves into the food and promptly snatch up their share (or more?). They will "grab" it with their tentacles, flip over, pass the food up from one "leg" to the next then to the mouth and nibble at it upside down-- almost otterlike. Each time I feed them, I can't help but pause to watch, amused by the acrobatic antics of the Notostraca family.

In fact they move so quickly, that it is virtually impossible to get a decent picture of their feeding habits. So here they are almost posing for the camera... 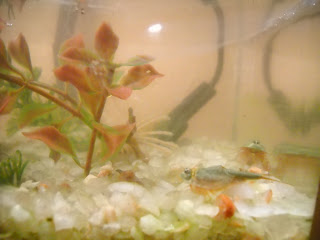 An up close gander at the triops, and you might recognize them from a sci-fi film. They look more like an alien space ship than they do their shrimp cousins, but shrimp they are! (Never fear! We won't be sauteeing these little guys!)

My son has several comic strips that he reads regularly. As a result he decided to name the Triops after the characters in the strips. 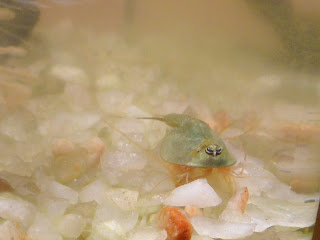 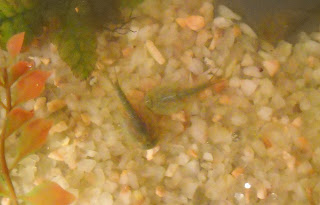 Calvin & Hobbes is his favorite comic strip but he already has a small stuffed tiger named Hobbes so the tadpole shrimp gets to be... 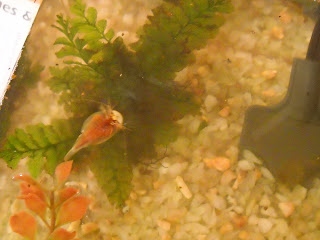 This is what they look like upside down. Amazing!

*Pictures taken by Aubrey Cloud on his birthday. Thanks Aubrey!!!
Posted by Danette at 5:34 PM 3 comments: Links to this post