As much as I love dolphins I decided against the Dolphin Research Center. Time at the beach, champagne at a favorite hideaway, and relaxation awaited so why tarry? It was time to finish my journey south.
Of course, the first thing I wanted to see was Hemingway's house. His footprint is visible everywhere-even in the tourist district.
The first tiny place they lived was here at the Casa Antigua...

Part of the mythos of this particular place is that Hemingway wrote 'A Farewell to Arms' while he lived here.
Moving on into the tourist district you find more Hemingway memorabilia. It was here at Captain Tony's (then called Sloppy Joe's) that Hemingway spent so many happy hours (literally!) drinking himself into a happy stupor. 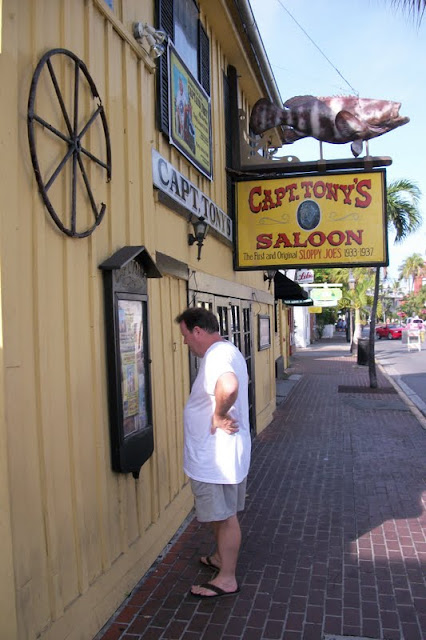 Sloppy Joe's is now on the main drag, Duval, and would most likely be the last place you'd find Papa Hemingway but they like to claim him as their own. (A typical ploy of hanger-onners...don't tell them I said that)
Enough of the dilly dallying around at the sideshow hangouts. Time to see the The Legends home.... 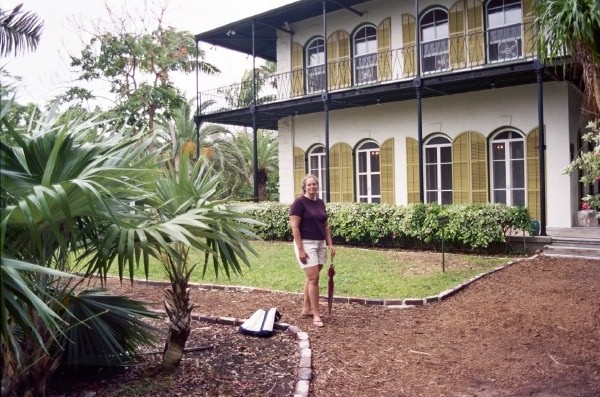 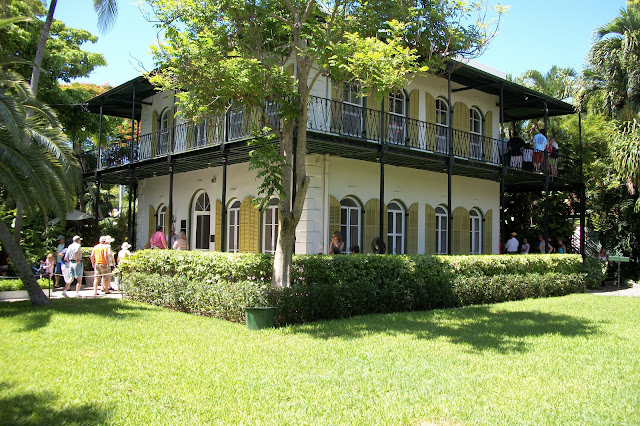 was completely enamored with Key West (at least initially) and only left after he became enamored with another woman (something he did with some regularity- see wife number two, three, and four) making the small island a decidedly tight squeeze for his (second) wife, himself and his mistress (whom he met at Sloppy Joe's second locale by the way- where she tracked him down, I might add).
But I am putting myself in front of the horse that is pushing the applecart. . . 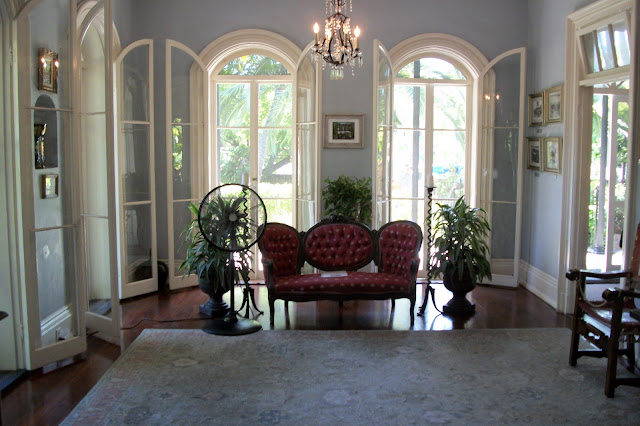 Hemingway's home was initially a reject when Pauline first saw it. She wasn't exactly charmed by the piece of drywall that hit her in the head as she looked around the place. But she returned at her best friend Lorrine's urging and decided to give the house another chance and saw the place in a little different light. She spoke to her uncle who then purchased the place for the newly married couple. She began renovations that even by today's standards are lovely. (Why oh why can't I have an uncle like that???) 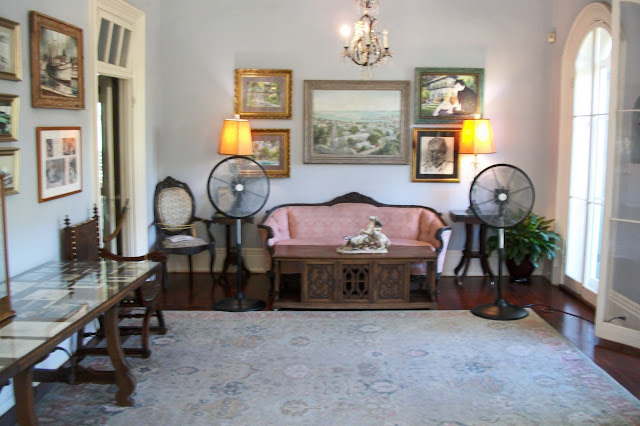 The Hemingways had not a few Dos and one might imagine the tales that were told by the Tallest teller of them all as he stood at one end of the table- his wife perhaps sitting at the other end wishing that his fictions were left to the typewriter. 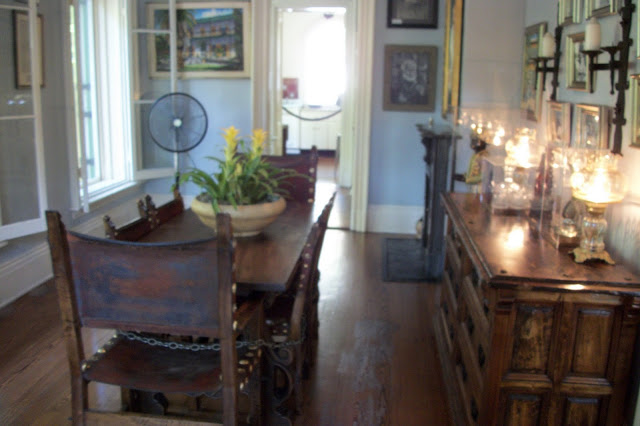 The Hemingway's kitchen is small yet functional even by modern standards. One could easily cook in this kitchen today. 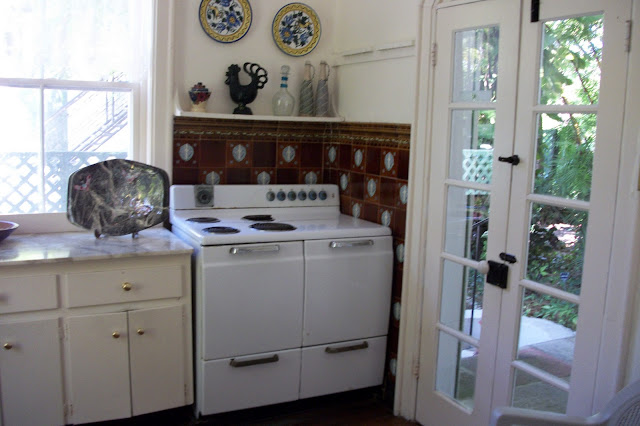 It is the perfect house for the climate: Breezy and open, with fans to keep the air moving, one can't help but wish the house were available for a little live-in inspiration. 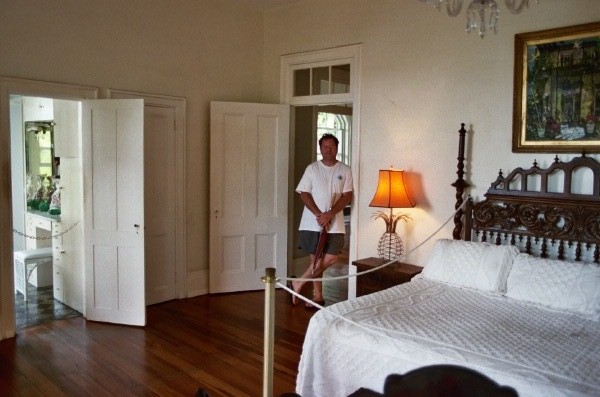 And a nighttime stroll under the stars would lead you out onto this balcony... (this is the vantage point that I took the picture of the lighthouse at the top of my blog...) 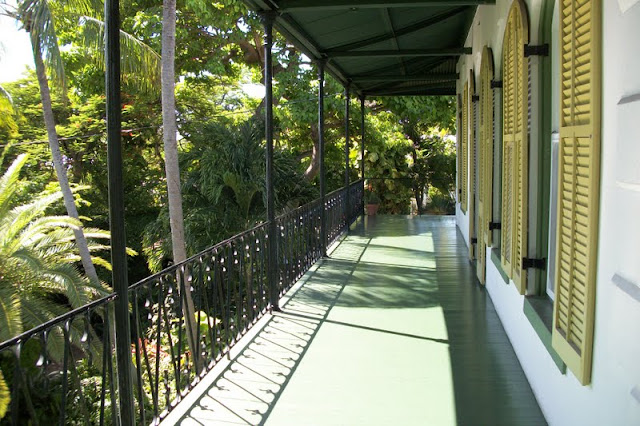 And the piece de resistance! The studio of a writer's dream! Writer's block? Take a little nap on the reclining chair... 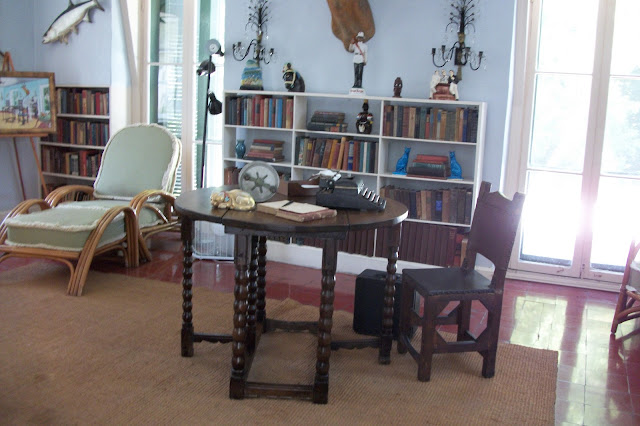 and, just down the stairwell is the pool Pauline built to keep her Writer home and happy. (Too bad it didn't work...) 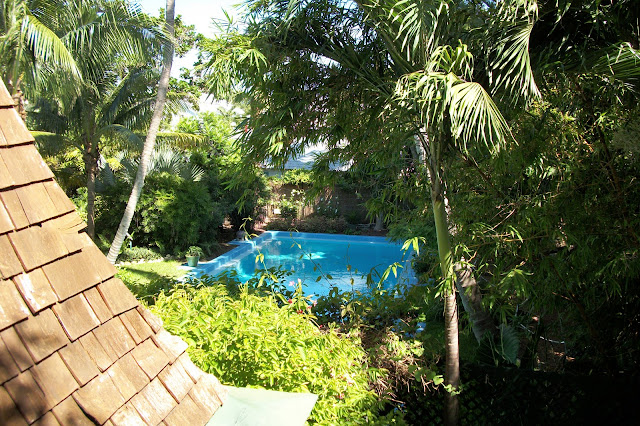 When Hemingway saw the cost of the pool, ($20,000!) he handed Pauline a penny out his pocket, laughed and said, "Well, you may as well have my last cent." You can still see the penny built into the cement around the pool today.
Such fun! Such Fun!