(This is the next section of my WIP 'Death and Politics at the End of the World'. It might be helpful to know that you are entering an otherworldly realm as you journey with my character. In my last post, I was asked what genre I was writing in. My response wound up being "Genre... think magical realism meets surrealism meets Quantum Physics meets my imagination and the authors who have influenced me (including Jeanette Winterson!") things happen that are out of the extraordinary at times so be prepared!! If you need to catch up, the first part is in the tabs at the top and the parts just previous can be locater here and here!)


III. Duality
The original bridge stretches out alongside the highway. Henry Flagler would burst the buttons of his sacque suit if he beheld the remains of his folly still in use by the state of for the infrastructure of Highway One, while the skeletal remnants of the “eighth wonder of the world” point knotted knuckles at the haunted tresses of the past. The view from the Bahai Honda Bridge is stunning, exposing a wide island vista. I dissolve into the liquid looking glass 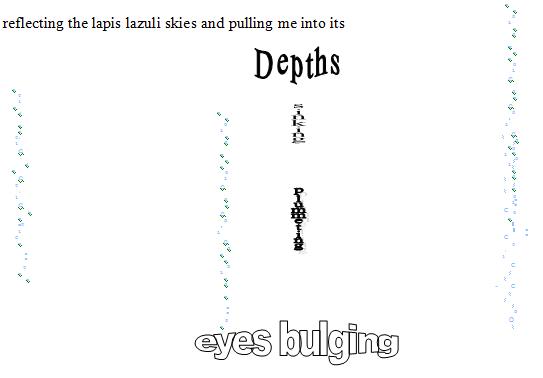 Arms fall uselessly, dead wood at my side. My body lurches, reflexively seeking to    expel,        inhale. A beam of sunlight shimmers on the surface but fades and wanes as I sink down, down…  Kick.
KICK!
Not even a dog paddle?
My torso sways instinctively, finally propelling me slightly upward. More force in the motion hurtles me up through darkling waters. I break the surface, and gulp reviving ocean air. Where was the bridge? Need to get back… Swells lead to shallow. My unfamiliar form confuses my senses but instinct drives me to follow Mother Necessity. My fusiform trunk seems well suited to the wet wilderness I am surrounded by. Experimenting with motion, I find myself twisting into a barrel roll: an aquatic airplane in tailspin. Crying out with delight, I abandon my former instinct for survival and dive back into the depths swirling a strathspey whorl.
My aquatic dervish thrusts me amidst a pod of fellow frolickers. We fly without wings, three reels of three into thalassic wilderness, travelers following Zohar’s porpoiseful paths. Plunging, our bodies gently roll, curve up, break surface, and spin over and over in mid-air. We whistle our bliss and soar out into the deep, following a gilt-edged path to the horizon.
Pulses and clicks: “The harvest.”
“Spread out.”
“Circle.”
“Keep in contact.”
“Beware. The tiger will be hungry as well.”
I
fall back…

“If you won’t eat, you’ll have to go back.” A glance in my direction, invites me on, luring me toward the hunt.
“ Thanks but… no, I don’t eat anything with more scales than me. Appreciate it. Maybe another day!”
I flee toward…
safer waters…
Didn’t I?  Glancing back, I am suddenly overwhelmed by my singularity; numbed by the vastness and profundity of the darkness below. Vertigo discombobulates, confuses, slows my flight.

Gently sloshing waters pull me back to myself. I gaze down, taking in the expanse of the water’s surface, snatched from neutral buoyancy, my sensory perception wakes from a long slumber…  I grip the railing, anchoring myself to concrete girders, cement my feet to pavement and flex spaghetti arms, key lime Jell-o legs. Staring down, the small shoal of uniformed uniforms on the shore are more surreal than the distant clicks of Atlantis’s descendents: the insupportable specter of the beloved existence engulfed here, extinguished in the swelling tide, tows a palpable grief back into the angle of my jaw.
Fragments of phrases filter up the embankment. “Look down…”  “what the hell…” “give me…  “  “there, Ben!” Miniscule Barney Fife’s scour the waters on a quest for lares and penates, nexus of speculation and substantial. “That looks like that could be…   “ “Now go over…”  “John, lower that…”  “Take it down…” No, the gunless deputy was far more efficient than these Police Squad washouts.
A John Wayne prototype saunters up to the edge of the nearby railing, hitches one Tony Lama on the bar and gazes down, a wee king of a wee-er kingdom. “You boys make sure you get over there by those casings…” Debris is dragged from the depths to be sorted and examined, then pitched onto a heap.
“Found something, sir!” A wide-eyed redshirt backs away from the pile displaying his plunder. The baiting fish crowd together to confirm the significance of the find as awed as an audience over a Fourth of July fireworks display.
“Put that in an evidence bag.” (Little Caesar can’t help himself, guaranteeing the most obvious is a chain of command decision. Job altering decisions are undoubtedly left for the first year rookie or newly appointed lieutenant . . . easy marks should the politicians begin to string their bows.)
“Keep at it, men. We owe it to this family to bring her home.”
Christ- straight out of !  “Hello! central casting . . ?”
I turn to leave, disturbed by the smoking gun, confounded by its significance, and upset at the possibility that my instincts might have been wrong: the absurdity of reality on another plane. Time to go to and return to terra firma…

Posted by Danette at 6:20 PM 7 comments: Links to this post