It's just a little hike then a nice climb... 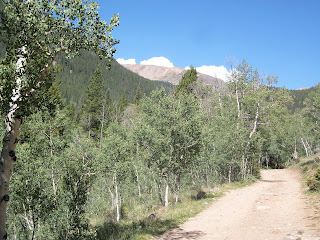 The goal was to climb a Thirteener... one of the many peaks in our state that are 13,000+ feet high (thus, the name Thirteener). Oh I know, some of you hard core hikers, bikers, or climbers will scoff and say our goal was ridiculously attainable- simple even. But for me, a person who at 16 or so went on a hike with friends and camping pals up Horn's Peak (13,450) but cried in despair before reaching...well, anywhere near the top. On the upside I did hike up Pike's Peak (a slightly higher peak but also a slightly easier climb) a few years later. But I am loosing ground here... 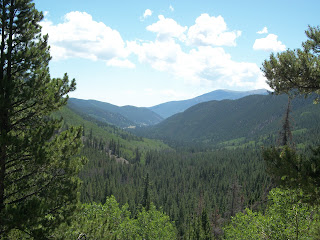 So in the beautiful blue of early morning's sky, we headed off with walking stick, lunch and plenty of water to aid our trek. 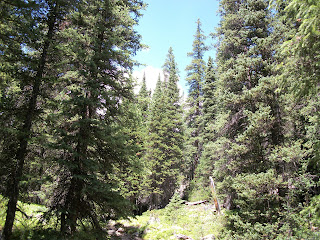 I felt a little like Bilbo or Frodo may have felt... adventure and challenge lay in front of me. I was ready for the day! Or so I thought... 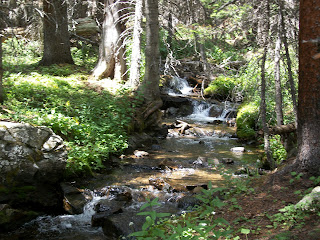 It was beautiful as you can see. We jaunted along jauntily until we read the sign that said it was 3 miles to the lake that was well below the peak and then, well let's just say, I was slightly less jaunty. (I had thought the 3 miles hike started a mile earlier in our day!) 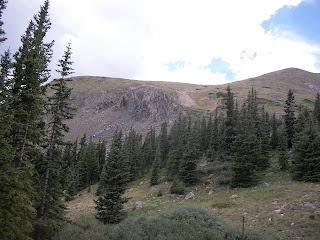 Nevertheless, we had planned to make it up that hill and make it we would (although to be honest, when I saw a lone woman traveling downwards, her traveling companion somewhere UP THERE, I began to think I would let Mo make a successful climb to the top without my labored step to slow him down). We finally made it above timberline (below) and I was pooped. 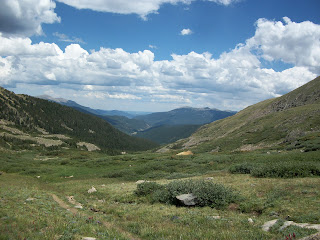 There is video of my giving my final thoughts and bequeathments, what to do with the body, etc. at this point but that is obviously not going to make it onto this blog. But I didn't actually die here fortunately and did keep going up the final leg...

to Gibson Lake. Alas, I could go no further and Mo gallantly would go no further. I sat for a while (not as long as I wished) to get my strength back and then we headed down. The weather (Mo said) would not allow us to make it to the top. The real truth was that there was no way I was going to make it up to the peak that day after that long of a hike so we went to the stopping point of many of those before us and then turned around to leave the Thirteener to another day.

Posted by Danette at 8:55 PM 11 comments: Links to this post