Coming back to life

It crept up on me like the Creeping Terror that landed in Somewhere*, USA. It had probably begun some years earlier as I reflect back on those years, possibly even in high school considering my penchant for tanning as soon as the sun was warm enough to create a rosy glow on my pasty skin, but the Winter of '94 was the one where I recall the darkness of soul finally overtaking me, dragging me down so that days were fog-filled and relentlessly wearing. The practicalities of two kids (plus homeschooling!) and home daycare (2 more, one an infant) were another detail that is impossible to describe as I really have no idea how I managed or they survived. I slept when they slept and stumbled through the waking hours of lunches and snacks, lessons and care giving for several months until it became apparent to even the most neglectful of souls that I was withering.
But the darkness could not just be shaken off. It was a cool, wet spring and the apartment we lived in had only one or two windows that faced north (never have a house facing north in northern climates. You don't see the sun for the entire winter and your walks are always icy!). Summer had almost made it's entrance before I felt the fog finally lifting, the sun was warming the earth, and we'd just moved into a new house- a house with 21 windows and a backyard where I could sun and garden. It was over!!!
I thought I'd escaped the prison of my apartmental-driven darkness... Until the next winter, when the days shortened and the days grew cold and once again the lethargy and pensive mood swept in. Not as severe, most assuredly, thanks to the southern facing windows where I laid down in the afternoons, but there nonetheless. It wasn't until some time later, through conversation and reading, that I realized that I suffered from Seasonal Depression or SAD as it's occasionally called. Fortunately, the treatment is fairly simple, cheap, and for me, pleasant enough-- Sunshine! (which fortunately Denver has plenty of!) In winters, I learned to use the sunny side of the house and to throw open the blinds as far as possible so that sun shone on the spot where I read or studied. And once spring came, I was sunning myself outside as soon as it was warm enough to have my skin exposed to the sun without a chill.
But winter is still not an easy time for me. The cold and shortened days drag at me, whispering to me of the days that I couldn't get out of bed without tremendous effort and then would lie back down as soon as I could. Some days, the chill is as real in the throes of my mind as it is my toes. I slog through winters with visions of warmer climates, a space heater close at hand, a blanket that goes where the space heater cannot, and plenty of bitching.
So perhaps you can imagine just how fun it was for me, to get out of bed on a day when it was 8 degrees below zero and face this... 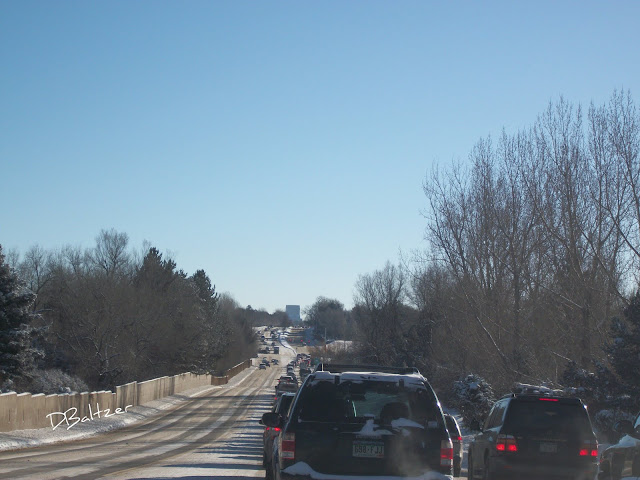 I'd driven my son to school and had the 16 mile drive to work. Traffic had come to a complete stand still and I sat in this spot long enough to become bored and start taking pictures. 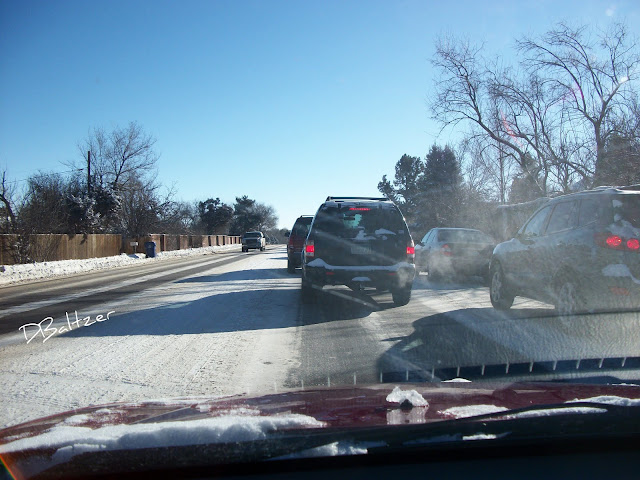 Aha! The hood of my new red car!!!
(I should have done some interior shots)
It took me twice my normal drive time (1 and 1/2 hours) to get to work that day... sigh
(I think I'm going to call the new car Flashheart... but I'm still debating)
Fortunately, February is as changeable as the wind... a few days later, we were back in the upper sixties and out on a walk. The day required little more than a jacket (if that) and this is the view over the pond as we walked on our path... 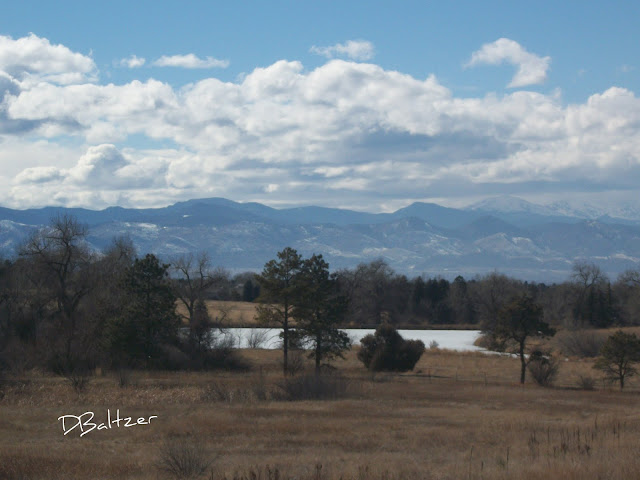 I breathe a bit easier on sun drenched days like this, but I cannot relax. February sings to me of frigid temperatures and pending snow. Winter's refrain continues on, with only the briefest of choruses of warmth to tease me, before picking back up the bitter harmony of cold and shortened days. 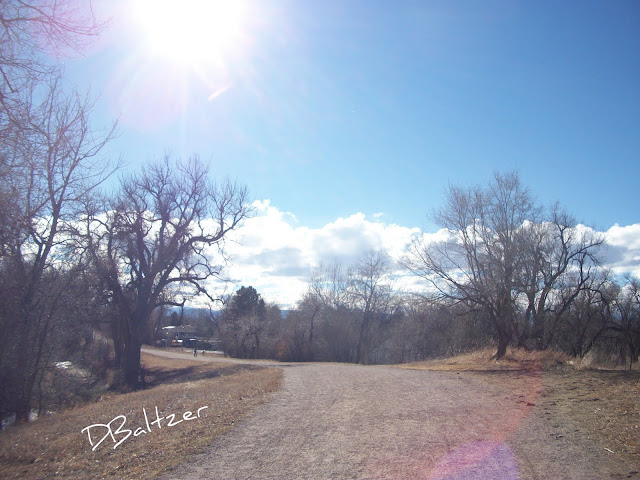 But with each step on this path we are trooping closer to March. Each day is a bit longer and the sun sits higher in the sky. The oxygen indeed does begin to loosen in the lowest parts of my lungs when I walk outside at 6 p.m. and realize there is  the faintest remnant of the sunset in the western sky!
Then to see (oh glorious sight!) the first buds on the trees, lightly beating the cadence to a new song. 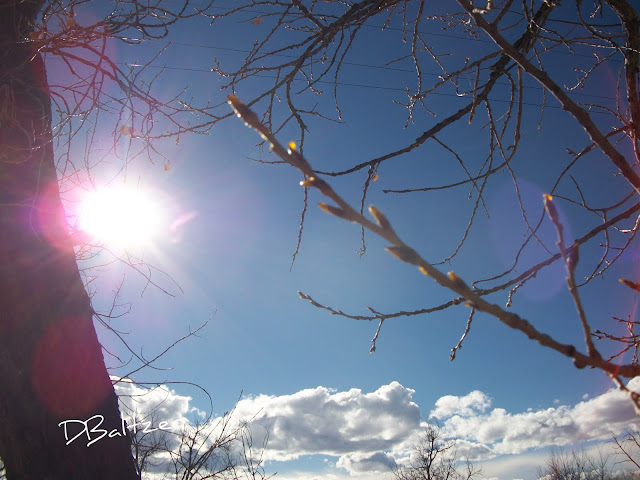 And to look down at my feet as the Ides of March skips ever closer, the first signs of new life that have been lying dormant for low these many months... 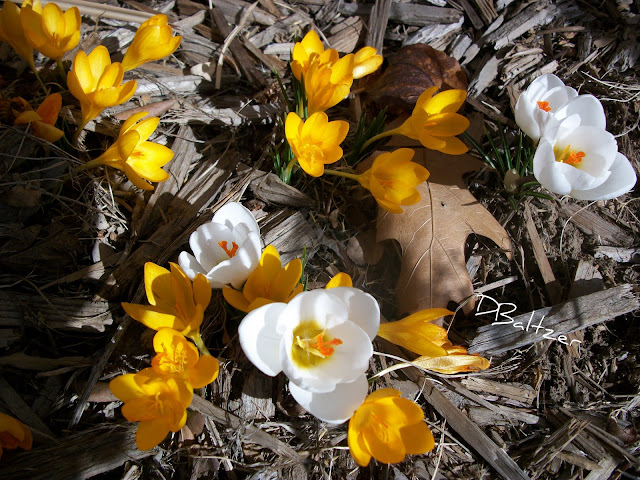 Crocuses!
The first flower of the season, pushing their way past the winter-dead grasses and weeds toward the sunlight. As anxious as I to feel the life giving warmth of spring, these small flowers will not survive through Easter (the species here mostly fade back into the ground as new growth takes their place). They will survive spring blizzards and introduce the melody of warm earth with bold coloratura.
The first signs of new life. The first sign of having made it past the darkness that is winter... 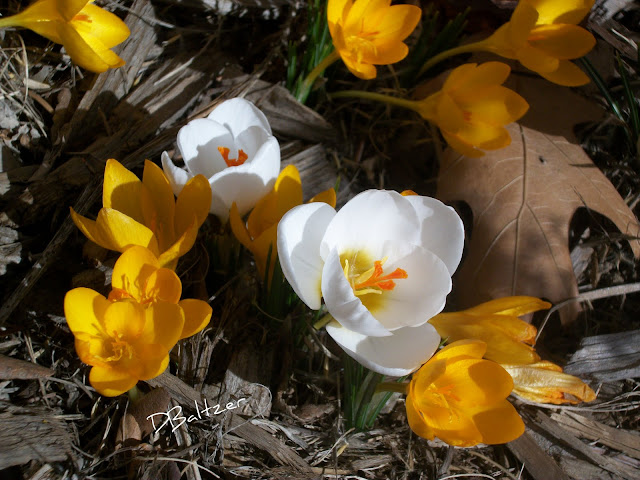 *I don't actually know the name so Somewhere is as good as any, right?