Book reviewing might be subtitled "the good, the bad and the ugly"

On the other side of the spectrum from the one that Mr. Crossley-Holland has set forth (below), comes Robert L. Park's... 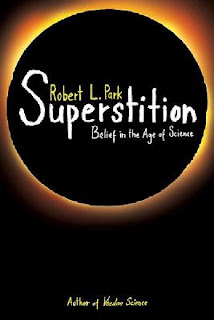 I have just begun it and am not reading it exclusively but at the beginning of the book he discusses the current movement among religious sects to try and unite science with religion.

In the first few pages (after revealing the mounds of money available to scientists who support and argue for intelligent design) he goes on to address the "Anthropic Principle", the principle which claims that "The fundamental parameters of the universe are such as to permit the creation of observers within it." or as he paraphrases so well... "If things were different, things would not be the way things are."

He addresses more directly a 2001 analysis of the anthropic principle "Probabilities and the Fine-Tuning Argument: a Skeptical View" by Timothy McGrew, Lydia McGrew, and Eric Vestrup. They wrote, "The Principle of Indifference: it is unreasonable to suggest that any one range of values for the constants is more probable a priori than any other similar range." Taking the author's claim on from a slightly different angle than is generally heard, Park brilliantly responds, "If the universe is designed for life, it must be said that it is a shockingly inefficient design. There are vast reaches of the universe in which life as we know it is clearly impossible: gravitational forces would be crushing, or radiation levels are too high for complex molecules to exist, or temperatures would make the formation of stable chemical bonds impossible. Even in our own solar system it seems increasingly likely that Earth is the only outpost of life. The search for life to which we are not related-- exterrestrial life-- is perhaps the greatest quest of science, but so far it has been disappointing. Fine-tuned for life? It would make more sense to ask why God designed a universe so inhospitable to life."
Posted by Danette at 12:39 PM No comments: Links to this post

Crossing to Paradise
By: Kevin Crossley-Holland

Lengthening his stay at the shores of the middle ages, Crossley-Holland recycles a supporting character from his Arthur Trilogy for his most recent adventures. Conscripted into a local lady’s service, Gatty is rounded up with seven other loosely bound individuals to aid the Lady Gwenyth in a pilgrimage to Jerusalem. Gatty quickly finds herself in a whorl of excitement from the first moment they set off- getting lost on the dark and dodgy streets of London, rescuing a compatriot when he nearly tumbles to his death and hitting the high seas on the final leg into Jerusalem- all setting Gatty on the adventure of a lifetime.

Crossley-Holland’s humdrum, yet action-packed (really there is almost too much action) adventure is fairly common in the marketplace of children’s books – or perhaps it might be better said to be too common and indistinct from the multitudes of children’s book on the shelves today. The adventure itself may keep a young reader's attention long enough to hit the streets of Jerusalem- and they won’t suffer greatly from the lack of prose but it's not a peanut-butter story. Unfortunately the author has chosen to use his middle England to Jerusalem setting as a backdrop for an introduction to modern Christianity. Third person narrative is used to put forth an ideology as in one particular scene where Gatty is lost in London. The third person narrative chimes in, "God took pity on Gatty" using the omniscient perspective to explain how it was that Gatty suddenly remembered where the group was going to stay. In other spots this same "voice" refers to “Jesus” as though he were a character in the book. In addition to this, the character's faith is often littered with a modern theology that would have been unfamiliar to people of the time. Prayers offered by the characters of the book are answered—an easy way to include a god personage into the story without preaching.

In historical fiction, the author walks a tightrope of reality and make-believe and when an author takes license with the historical realities of the period, they risk losing the story. In this case, the historical inaccuracies by and large seem directly aimed at propagating an ideology as opposed to a lack of research on the part of the author.

As a former member of said religious affiliation, I can testify to the intention of Christian believers to spread the good news in just such a way. It was a widely taught method-- living the gospel rather than preaching it (which sounds inoccuous enough). Unfortunately in LIFE, living out perfection is much more complicated and the technique is generally not a successful method of proselytizing. In fiction it is a much more effective tool because the author can make sure god does the things that Christians believe god does or want him to do. And, as a former Christian, I considered these matters myself in my own writings-- In fact, the author's example may set a standard for just how a christian author can include christianity in as subtle and seemingly harmless way in their writing as possible. By using the third person to include jesus and god in the narrative, a Christian worldview is presupposed. Christians believe that god answers prayer-- a fiction writer can make god answer the prayer. Christians believe that jesus hears their prayers-- a fiction writer can say "jesus heard her prayers." Using this authoritative voice, the author then presents his or her religious ideology without a sermon. Using their imagination, they create the world they want to have, the one where christians have peace that others don't have or have god's guidance in the dark of night or are better than other people are because god changed them.

They, in essence, create their own reality.

Holland’s stories, while not a sampling for a Billy Graham revival, are firmly rooted in Christian theology and utilize a technique for proselytizing that is just as insidious as the 'Left Behind' series. Avoid them!
Posted by Danette at 11:53 AM No comments: Links to this post