And now a word from our sponsors 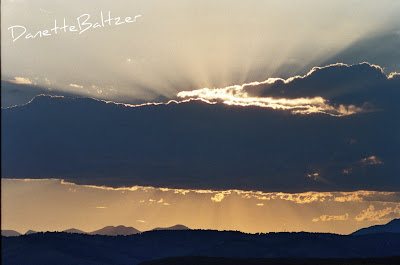 The sunset on Green Mountain, a glass of champagne and chocolate combined with hand holding and conversation that includes, "remember the time..." makes for a perfect evening.
Posted by Danette at 9:26 AM No comments:

In a previous post, I mentioned the insidiousness of commercials- how they create need that wasn't there before or is not a need at all and may, once you have it, not even be a want. Perhaps as adults, we feel less affected by advertising. We may even feel in control and pandered to by advertising (why do we resent salesmen so much but don't mind commercials? It's the same thing.). We feel they have become just a necessary evil in watching our favorite programming for free and sometimes a short source of entertainment (i.e. superbowl commercials).

Unfortunately, they are not. One of my favorite shows is 'Madmen'- a unique little program on American Movie Classics that is receiving a lot of critical acclaim. The drama on the show is interesting and engaging- (I worry about Don's children who are being raised by a more than slightly crazy mother and a father who is disengaged and neglectful -to say the least) but what I also like about the show is it's ability to reveal how advertising affects WHAT we watch. For example in 'A night to remember' in season two, one advertiser is chastised for buying advertising space on a show that references communists as "agitators"-- his clients, Maytag, were not happy about his lack of oversight. They felt the unfortunate use of the word "agitators" would immediately connect their washing machines with communism!

Although it may not seem like censorship, after all they certainly have the right to associate their product with whatever show they choose to, yet when quality programming is not aired because it cannot find enough advertising to pay for it's air time because the companies do not want their product connected with ideas they don't approve of, then it is the corporations that are dictating what we watch and see on television, NOT what the production companies think we will like. There is the illusion in a capitalist society that we have the power because we have the money-- but the reality is that we are being played-- like a cello being stroked by Yo Yo Ma. And make no mistake, everyone involved in advertising are virtuosos.

Advertising is impacting so many areas of our lives-- our politicians are being chosen essentially by advertising (even if people are finally fed up with McCain-- Obama should not be the man of choices based on his commercial appeal). People, we need to resist the commercialism in our society! We need to stop being the instrument and start being the musicians in our lives.

By the way, if you watch 'Madmen' on Comcast-on-demand, there is only one commercial the entire show and you can fast forward through that!
Posted by Danette at 9:25 AM No comments:

Email ThisBlogThis!Share to TwitterShare to FacebookShare to Pinterest
Labels: culture

A local shop for local people

Could it get any funnier... Don't touch the precious things of the shop!
Posted by Danette at 9:10 AM No comments: