We need the public option!

It's clear that we're not going to get the healthcare reform that we need unless we force our legislators to do what is right. Progressive groups all over the country are fighting hard but they need the people to speak up. There are a few bills floating around Washington that have a public option but they are being shoved aside because the White House (a.k.a. Barack Obama- NOT George Bush surprisingly)made a deal with Big Pharma and the insurance companies (see Robert Reich's blog for more information. His link is in list of blogs that I follow.) It's criminal and we should all be outraged. This is what Obama ran on and he sold out on the issue before it even came to committee!

It's time for our government to do what is right for the PEOPLE not just for the corporations. Sign Howard Dean's petition today to add your voice to the call demanding that politicians do the right thing for the American people-- for once! www.AmericaCantWait.com.

Posted by Danette at 7:07 AM No comments: Links to this post

Email ThisBlogThis!Share to TwitterShare to FacebookShare to Pinterest
Labels: politics

Why. . . it's Mental Illness Awareness Week! I wonder if there is anyone with mental illness who needs to be made aware of it? (of their mental illness not the week)

OOH! AND! It's banned books week. Now there is a topic worth being aware of.

Some of the books that have been banned are: 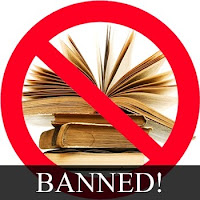 Some of them are not too surprising given the puritanistic roots of this country, but the dictionary is rather funny.

Some of the books that governments have banned are:
'Brave New World' banned in Ireland
'Candide' banned by U.S. Customs
'Doctor Zhivago' banned in the USSR
'Lady Chatterly's Lover' banned in the U.S. and Great Britain
'Ulysses' banned by the U.S. (overturned in a case called "United States v. One Book Called Ulysses")
Posted by Danette at 6:02 PM No comments: Links to this post

Email ThisBlogThis!Share to TwitterShare to FacebookShare to Pinterest
Labels: funny

October 1st is the beginning of National Blog Writer's Month. But more pressing still... tomorrow is Confucius Day! Who knew??? And more exciting still?? Wednesday is Mud Pack Day. Wow life is full of interesting things to celebrate. But I will be acknowledging Blog Writer's Month by posting daily-- I hope.
Posted by Danette at 7:28 PM 1 comment: Links to this post 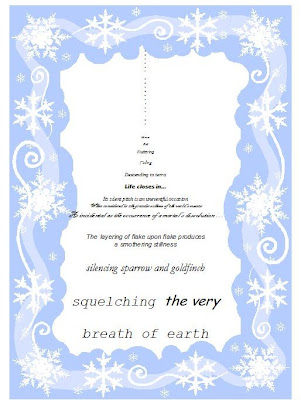 The earth cradles the white flakes producing a dappled landscape until the browns of winter are asphyxiated, leaving behind a stifling blanket of white. The hold of darkness is released and the earth glows, producing an ethereal beauty that can be felt in the silence of the soul. Artists and poets attempt to capture the somber beauty but their efforts fall short and result in a copy of very poor relief.
With the ascending sun and the broadcast of school closings, the silence is broken. A collective shout for joy goes up among the children of the community as they anticipate a day full of adventure: battles with icy bombs whizzing through the air leaving crimson welts on the sides of the enemy’s face; bodies are launched onto the ground the prostrate forms with arms and legs flailing leaving the imprint of heavenly beings in their wake; or constructing snow sculptures on the pristine white overlay in front yards or a nearby park. Drowsy toddlers leap out of bed and stumble to the window, as alert and excited by the snow as they would be of a sighting of Father Christmas. An armistice is called between rival siblings and feelings of good will and charity abound.
Breakfast is waved off. Mothers gape in amazement as children, who are otherwise helpless in the day-to-day affair of getting off to school, magically seem capable of matching socks, finding lost snow boots and donning tight gloves with minimal supervision. They bundle up snuggly without fuss, pulling caps down over ears so they aren’t called back with the shrill threat that “it’s ten degrees colder out there than the weatherman said it was because of that icy wind. You’ll catch your death!”
Swaddled dwarves barrel out front doors, thrashing at the snow so that it eddies around them, a wintry Sufi mantra. Up and down the street, children wave, laughter couples with shouting to break the morning solitude like a frozen stalactite as it cracks, falls and shatters across the ground. Snowballs fill the air as comets did Halley’s imagination. 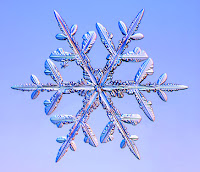 The first snow always seemed a magical thing to me. I would step out the front door of our little house and stare at the brilliant landscape suddenly void of hue, the frosty air freezing the moisture in my nose and replacing warm respiration with an arctic chill. I shivered in spite of the warmth of my jacket and stood motionless; astonished by the frozen landscape that accepted winter’s whitewash as though it belonged and always would. I was breathless, stunned by the solemn beauty, surprised by the heretofore unknown charm of the neighborhood. The roofs of houses, brown dormant grasses, leafless branches and pock-marked streets were camouflaged. The house across the way (which in the snowless months of the year was similar to Pippi Longstocking’s villa) in the winter, resembled something straight out of Lucy Maude Montgomery.
Posted by Danette at 8:17 PM No comments: Links to this post