And to anyone who has ever so much as peaked at my blog, they'd say, "DUH!!!!" but part of the reason I love Key West is that I love the ocean. I have loved the ocean ever since I stood here...
I'm not exactly sure this is the exact same beach, but I don't have a picture of the beach I was on and there are not tons of pictures of the southernmost point of India on Google images, actually. At any rate, we spent a glorious day here, body surfing and playing in the ocean. I had never felt the water the way I did here that day even though I had been in the Pacific Ocean a few years earlier. And standing there at the edge of the world was an amazing moment that I have been fortunate to feel several times since. In Key West...

A headline that breaks my heart caught my eye today on my blogroll- I have Al Gore's Blog if you scroll down to the "New And Current Issues" section you will see it there. The headline was "Mass Extinction". I clicked to see what new thing we were managing to extinguish and found this (which came from CBSnews of all sources!!!),

We have already done huge amount of damaging to our oceans with huge implications for all of us.
“The threats of over-fishing and to the world's fragile coral reefs have long been well documented, but now a panel of scientists say the threats to marine life are far worse than previously imagined.”
“The International Programme on the State of the Ocean (IPSO) convened a self-described "first inter-disciplinary international meeting of marine scientists of its kind" recently, and they have released a report claiming,"multiple ocean stresses threaten globally significant marine extinction."
“Dr. Alex Rogers, scientific director of IPSO, said in a press release: "The findings are shocking. As we considered the cumulative effect of what humankind does to the ocean the implications became far worse than we had individually realized." 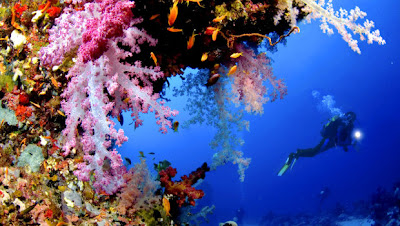 I gave up eating seafood because of the poisons in them and over-fishing but it seems it's too little too late. I'm just a little fish in a great big pond of gluttony which is how I feel about global warming.
Sigh....