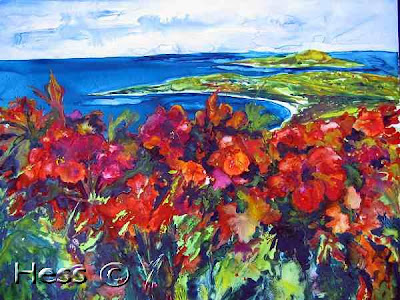 Posted by Danette at 4:18 PM No comments: Links to this post

Email ThisBlogThis!Share to TwitterShare to FacebookShare to Pinterest
Labels: Death and Politics

She walks down the street with a confidence that holds life itself in contempt- a "you-aren't-going-to-defeat-me" gait that carries her around the common and beyond the peonage. She plows through the cracked and crooked cyprus door, pausing only to allow her cornea to adjust to the dim, a duskiness that inhabits the cleavage of the walls, scurries across the floorboard and over the surface of the shack that somehow gained the reputation as a shop. The compound odors of garlic, curry, cigar, incense, dust, and ancient artifact condensed to agitate the nostrils of her finely refined nose. She swipes at her sharply pressed sierra sand colored skirt and fitted white blouse in reaction to the nearby grime and scans the perimeter against possible incursions. The tailor made "Refined Explorer" boots she purchased in Milan wrinkle at the toe wrinkle in distaste of their own volition at the dirt floor which had undoubtedly been the bed of a herd animal at some not too distant past. Her cosmetically enhanced nails brush a single stray hair back in place as she gathers herself against the onslaught.

She takes a folded letter out of her pocketbook and glances over it "...happy to hear you may have discovered... can't tell you what it will mean... will await your article... Finkelberg has a new find... a real blow... your work, in the right hands, might... Get back to us as soon as you can!" Finkelberg! That Israeli hack has no loyalties. His own people were tired of his anti-biblical rant. She takes a step in one direction, then another. Scowls silently, "Gives pacing a bad name" then stops to glare toward the "back" of the hovel where a man's voice seems to transmit from.

"You, hey there," the international accent was so heavy that it was nearly unintelligible-- to anyone. "What do you here?"
Posted by Danette at 2:54 PM No comments: Links to this post

the dark side of the moon

What does this mean?? Twisted, dark things that are funny... maybe like me.

Some of my favorite funny things are the Ann Taintor products (www.annetaintor.com)

You can also find her products at Peppercorn and Paper Dolls in Boulder. (The kitchen towels are terrific!)And FYI: these are real models. She has profiles of them on her website.

I have found a few that express the inner Danette... how about you?
Posted by Danette at 10:00 AM No comments: Links to this post