Riding alongside a lightbeam 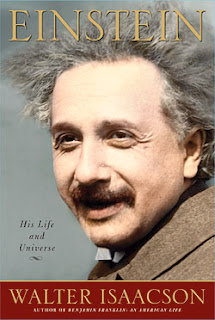 Sometime ago, I read Einstein: His Life and Universe having gained an interest in his Theory of Relativity after learning that Lawrence Durrell had leaned heavily on the theory for his Alexandrian Quartet (and I count this among the most amazing fiction I have ever read-- highly recommended reading!!! You will be ready to pack your bags and go to Alexandria after reading the Quartet!!!). While reading the biography I was impressed by the famous physicists way of thinking. He was quoted as saying, "Accumulation of material should not stifle the student's independence...a society's competitive advantage will not come from how well its schools teach the multiplication and periodic tables, but from how well they stimulate imagination and creativity."
Einstein's ideas were developed first in his imagination. As a young man he would imagine trying to catch up to a light beam- but then in the same thought experiment the complication arose that another person who saw the ostensibly the same thing, did not see the same thing. How could this happen? His imagination eventually led him to develop his 'Theory of Relativity.'

In another section his biographer notes, "Therein lies the key...to Einstein's brilliance and the lessons of his life. As a young student he never did well with rote learning. And later, as a theorist, his success came not from the brute strength of his mental processing power but from his imagination and creativity. He could construct complex equations, but more important, he knew that math is the language nature uses to describe her wonders. So he could visualize how equations were reflected in realities-- how the electromagnetic field equations discovered by James Clerk Maxwell, for example, would manifest themselves to a boy riding alongside a light beam. "
I personally believe that learning the multiplication tables is a foundational piece of education which is lacking today but it has it's place... but I also firmly believe that the lack of imagination and creativity in learning today is also a large piece that is lacking in our schools. Too many of our students are merely learning tools for trades and careers and not learning how to think critically. Thinking critically is an act of creative teaching not an act of rote memorization or plugging in numbers.
Einstein once declared, "Imagination is more important than knowledge."
As a writer, I may be a little biased, but to my way of thinking, all of life begins with imagination.
Posted by Danette at 8:10 PM 2 comments: Links to this post