And the Oscar should go to... 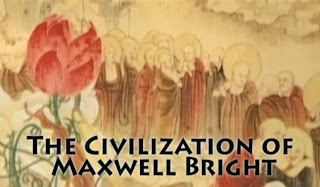 On a stone bench sits what appears to be a Buddhist Monk quietly ruminating amidst the red flags that waggle and flit in the gusty breeze that dances between the stone pillars of the temple stationed at the top of the hill. A man's voice is dubbed over the oriental music that accompanies the quiet scene, "There is a Zen saying: A true Buddhist will gladly jump into hell in order to save another human being."
And then we enter hell, mon.
With home video-like quality (although nowhere nearly as shaky and bouncy as "Cloverfield"-- that almost made me dizzy!) we zoom into a quiet and austere middle class neighborhood. The scene quickly changes as a door opens and a nude woman dashes out into the street screaming "Help! get back! somebody help me!" a neighbor glances up to see a man close on her heels adorned in his best birthday suit, his hand staunching a gash in his skull and shouting "What did you split my head open for?" The police quickly intervene (probably much more quickly than they do when getting a call about a real-life domestic) and with this "that-was-way-more-than-I-wanted-to-know" moment we are thrust into the life of one Maxwell Bright --masterfully played by Patrick Warburton.

Life has moved beyond chaotic for Max and one might feel a tinge of pity for him if he weren't such an incredible ass. His employees are mutiny-minded but his single friend Jaurice (Austin Pendleton) intervenes and reminds them that he's just having a hard time after having been cheated on and beaten up by the afore mentioned girl-friend. (Oh poor guy, one thinks facetiously...) After an intervention, of sorts, by his friends, Maxwell Bright lands upon a solution to all his problems-- which might actually epitomize his assholery. He decides to buy a wife.
The decision, however ill intentioned and absolutely and contemptibly self-serving, winds up being a good decision on Max's part and we soon see him married and alit with what might almost be joy as he introduces his new bride, a beautiful and gentle character who's entrance completely changes the dynamics of the heretofore reality show reject, to his poker playing buddies.
The "oriental Mary Poppins" transforms Max with the spin of her paper umbrella,

into a gentle and contented, almost-human, character. Well, for a bit. After all you can take the beast out of the wild, but you can't take the wild...
But life isn't really magically transformed for Max- he has created his own special place in hell and hell is determined to drag him back. His credit cards are maxed out, the bank won't honor his checks and just after this bit of reality gives him a punch, he finds out the stock in his shop (he sells TV units)is being repossessed. And that is just the beginning...
Though generally panned, or at the very least received luke-warmly, by critics, the very criticism of the know-nothings is what makes this movie a unique in Hollywood experience. David Beaird, the creator, writer and director of this extremely limited release film, is a dealer in the archetypal, giving birth to stories and characters that go beyond the trite sermon or simple entertainment such as his Louisiana based story Scorchers or Key West, the series that barely had a half-life in a television year (and has been discussed elsewhere on this blog). The Civilization of Maxwell Bright is no different.
Max is the Everyman, an over the top example of the uncouth that lurks in us all: selfish, self-absorbed and stuck in a middle school world of "it's all about me." He is that Us that we cover up with adult superficiality which Max hasn't the time to discover.

Mei Ling, his beautiful, bought-and-purchased-with-cash wife, is the archetypal woman, Mother Earth/Moon Goddess who nurtures and counsels, nurses and instructs.
Simon Callow, a lead player who has not yet been mentioned, has an archetypal role to play as well.

When Max bumps into frustration (and potential ugliness on the part of his wife) he goes to Mr. Wroth to secure his promise that he will find him a beautiful wife of "intelligence, virtue, ability and honor" When Max queries about sex, he's told "[in China] young girls are taught sexual techniques by skilled older women." Mr. Wroth appears, at first glance, to be merely a "snakehead" but his role as her father the "wise parent" who arranges the girl's marriage to the one she will love becomes apparent when Max takes advantage of his position as husband (and perhaps in his mind Owner) of the beautiful sex goddess. Wroth shields his young charge (as her real father could not, perhaps would not, do) when she runs away from the abuse of the man she is wed to and in so doing reinforces the power she is claiming for herself. Giving her the opportunity to walk away and never look back, the role is now reversed, she is the one who chooses, not Max.
Beautifully played, marvelously directed, wittily written and tightly woven, this film stands head and shoulders above anything Hollywood has to offer. You can rent a copy from Blockbuster Online (it's probably not in any of the stores), order it from Barnes & Noble (maybe Borders too) or you can rent or buy it from iTunes. However you manage to see it, expect the unexpected.
Posted by Danette at 3:46 PM 3 comments: