There's a Place I Dream About

In 2005, my darling Mo introduced me to a show that was on television in the 90s called 'Key West'! I'd never seen anything like it and I was hooked. Some months later Maurice took me to the magical place at the end of the United States (in February when it was snowing here in Denver).
Needless to say, I fell in love!

But Key West is more than a vacation resort or even an island at the end of the Keys in Florida: It is magic and wonder and innocence and wantonness all rolled into one. In Key West "there are angels in the spray, wizards in the palm trees, and elves in the seashells and they all look very favorably on struggling young writers."* And one hopes, the not so young (like me!). 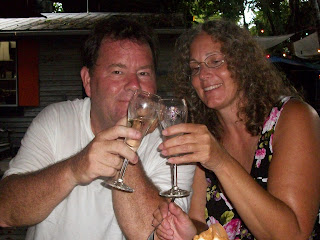 Although I reside in the Mile-High city in my "real" life there is the home of my heart... the End of the World, the Land beyond Time, Key West. Key West became, for me, the Place of my imagination. The location where "things" happen that can't really be accounted for and seem beyond explanation.
It is my hope that amidst the incarnate you will see some of the ineffable. Hope you enjoy!
*David Beaird in the first episode of 'Key West'

As for specifics about me...
I'm a transplanted Coloradan who hates the winter and has a passion for long lingering summers which is one of the reasons I fell in love with the Southernmost Island. Born in Tulsa, Oklahoma (where the wind comes sweeping down the plain!!), I was fortunate to have been transplanted to Denver in the waning hours of the 70s just in time to experience 80s rock and the birth of the music video. A music major in college, I spent most of my early adulthood performing and raising 3 kids and fostering several others (at one point there were 6, yes 6!, kids in the house). During this time I was also busy writing but didn't commit myself to it until I cleared out the cobwebs of a broken marriage (and life) and headed out to explore.

By day I am cleverly disguised as a Lead Clerk for the Denver Public Library when I am really a bibliophile and writer of fantastical tales that some might try to classify as sci-fi or surrealism (but in reality is neither). I am an avid reader, an amateur photographer who loves showing off the beauty I find all around me as I find my way through the highs and lows of life in Colorado. I also love science and I would do what scientists do (you know, science stuff) if only I'd had the foresight to get a degree in... science. I also love the water (another thing to love about an island- lots of warm water!) and have a passion for politics (I guess I also could have gone into journalism).