homage to the moon 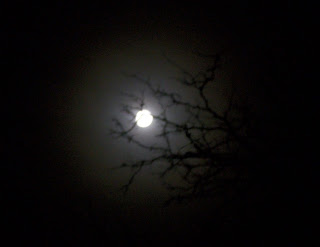 She raises her hands slowly upward in silent homage to the Empress of the night. The ocean’s sigh echoes on my palm, fingers tingling in remembered suspension, I only just stop myself from joining her melody stereophonically. “Ka—losor—isma-a-a-a, ka—losor—isma-a-a-a selene mana” the ancient words “welcome, welcome, moon mother” vibrate, an otherworldly iteration as familiar as a child’s lullaby. I ex-inhale shallow breaths of anticipation. There is a lifetime of silence before the faint antiphony winds it’s way through the branches seconds later  “ka—losor—isma-a-a-a, ka—losor—isma-a-a-a selene mana” An earthbound star flitters in the distance, a lone celestial infant making it’s way through the trees. Splintering molecules, one becomes two becomes four until a dozen tiny lights glimmer in the darkness, winding their way towards the girl as she chants out her greeting again.
“Luna reflects our own life cycles
affects menstruation and ovulation
She is a symbol of life,
of choices,
of change
Some would purge her from the collective consciousness
would reject the cyclical nature
of life
of emotion
of her phases
They would like to think of her merely as rock to walk on
distant soil to explore
We reclaim you, Moon Mother
from the tyranny of the sterile
We honor you tonight, Ancient One
for connecting us to our deepest selves
and we welcome the life you symbolize for us.”

(Not getting much done, other than preparations for Christmas, work and getting my son back and forth to basketball practice/games. I would have written something new to post, (this is from Death and Politics) but I find that what energy I have for writing -and it's not much-, I want to put into my WIP so I thought I would share a bit of it.)
Posted by Danette at 9:37 PM 11 comments: Links to this post

Email ThisBlogThis!Share to TwitterShare to FacebookShare to Pinterest
Labels: Death and Politics at the End of the World, The moon
Newer Posts Older Posts Home
Subscribe to: Posts (Atom)