You came by with a little nudge on the back of her shoulder this afternoon. She shrugged you off hoping you would go away in the usual way. It's been over a year since the two of you had a real knock-down-drag-out and she thought she had had the last word when she took that doctor's advice and showed you the door. Take these pills and come back to see me if you need some more help, he'd said with a smile. I think we've got it all under control though. She looked at him in disbelief, after all, the two of you had been together for a long time... the purchase of a house, the birth of her youngest son and the flailing years of an already bad marriage. Almost twenty years. Hard to believe that she was going to get rid of you now. You don't believe me? Confidence of a man who has spent too many years in school being told that he can do anything with his education and the right prescription. We'll see. Lack of confidence of a woman who has been left throwing up into a box in the backseat of her car, eyes and head spinning. Then she tries to head to refuge and bed only giving in after having barely driven a mile, she pulls over to cry, throw up some more, rest and drive a bit further. Rinse and repeat.  Disbelief of a woman who takes pain pills 2 or 3 times a week to be able to function. Sometimes not functioning. Because of you. Because you have been around for nearly as long as she can remember.

And here you are again...
nagging, pinching, pulsing, 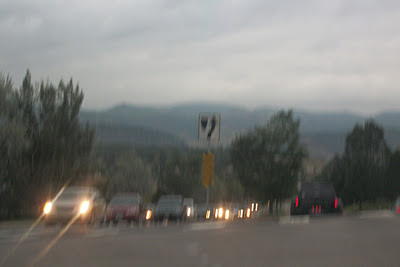 Sounds, colors, dimensions rotating, echo and slide off one another into a kaleidoscopic reality that defies attempts to focus
Lights and angling surfaces lose focus, an agonizing back-drop to the little universe of frayed nerves
rolling, reeling space
disconnect between


(Once again. I am indebted to my doctor, Dr. Moon of the Denver Neurological Clinic that my migraines have gotten so much better! While I am not completely cured as he had hoped, they are so much better that I am no longer taking migraine pain medication 2 or 3 times a week which also means that I don't have to worry that my insurance cover it and force me to pay $200 for the medicine -which only lasted a week- or leave me begging & crying for help from the pharmacist. Which I did one day. Completely humiliating.)
Posted by Danette at 12:30 AM 3 comments: Links to this post