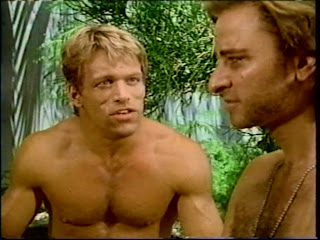 It's week two of the re-re-re-re-running of Mo and my favorite series Key West (isn't it a coincidence that I love Key West and the show is called Key West???... not so much!! :) Our hero, Seamus, has lost all his money and has spent some hilarious moments on the show trying to make a living at various careers at which he... well, bungles is too gentle a term. He is now in a quandary about what to do in order to fulfill his dream of being a writer and make a living while living on the same island that Ernest Hemingway and Tennessee Williams (and other writers actually!) had gotten their creative juices from. After a visit to the recentering program with the town's sheriff, Cody tells Seamus about his vast experience in living a life of bliss wherein he became "a lion, manifested" while Seamus sits beside him, ostensibly meditating. But the sheriff realizes he can't live his life that way. They'd put him in a zoo. So he had to "learn how to do his karma dance with the physical thing." 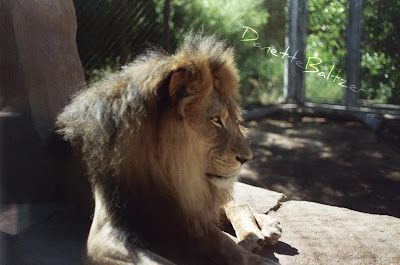 So my favorite quote is the one that has gotten me through the darker moments of my work related life in the past five to six years, like when I was working a second job at the local grocery store as a Courtesy Clerk (a.k.a. Bagger). I had to go out on some of the coldest nights of the year-- well, correction they were actually record cold temperatures that year--  to bring in the grocery carts... and I was already so tired and weary after having worked at my other job all day and I wondered why I was out there schlepping metal carts around on the pavement in between the poorly parked cars for people who were too lazy to even put them somewhere that I could get to easily... Why was I doing this again? I was often in tears (or had icicles on my cheeks that wanted to be tears) as I shoved the carts through the snow angrily.
And the answer would inevitably come that I left my old life in order to be a writer. I NEEDED to be a writer--- and I couldn't be a writer and be on my own without money...I needed as Cody put it "The green energy" So...
My favorite quote from the show for this week and the question to ponder...

“How do you live in this world and follow your bliss?"

Posted by Danette at 8:18 PM 3 comments: Links to this post