I had a Bugs Bunny grin, frizzy wavy hair, gangling long legs and was painfully shy.We'd just moved from a small farm town in Oklahoma to a small farm town in Kansas where the other kids had known each other from the day they'd started wobbling around town at their mother's knees. Add to that the likelihood they were cousins once or twice removed, and it was a pretty tight-knit community our family had just moved into!

I was already an avid reader but the new climate only added fuel to an already burning fire. One particular month, The Weekly Reader Book of the Month Club sent 'The Black Stallion'. I fell in love!
The horse was magic and mystery and adventure all rolled up into one. I would lie in bed and dream of clutching the mane of my great horse's mane and ride off into the distance. Children care not for the grim reality of awakening from a dream... I would be far away from the new town in the new school where I was the new girl. 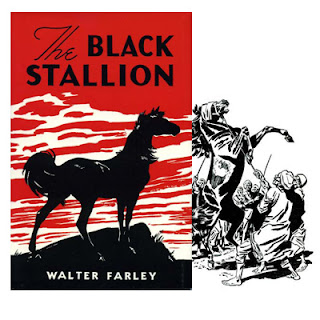 And that is what happened with each Black Stallion book I read whether it was 'The Black Stallion Returns', 'Son of the Black Stallion' or 'The Black Stallion and Satan' etc.... well, you get the picture. I went on to read other horse books 'My Friend Flicka', 'Misty' and I loved them all although my first love remained 'The Black Stallion'! Which is why, when I received a copy of 'The Black Stallion' from my darling Mo on our first Christmas together, it was and still is one of my most cherished presents ever! I was so enthralled with the idea of being on the back of a big racing horse that I dreamt of being a jockey. That is until it dawned on me that I was already, in fifth or sixth grade, quite a bit taller than the jockeys. I was CRUSHED!!!
In the spring of that school year, my brothers and I were taken to a babysitter's home for the day. The television was on and with nothing better to do (I must have forgotten to bring a book) I plopped down to veg for the afternoon. The picture flashed onto some beautiful long legged thoroughbred's as they were led from paddock to race track and I was immediately hooked. I inquired as to what the event might be and was quickly answered  "The Kentucky Derby." I knew what the Kentucky Derby was immediately and settled in for the pre-race furor. 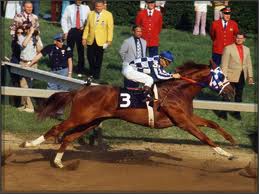 I don't honestly recall if I selected Secretariat to win from the beginning. He wasn't black and he wore a hood so I think I might not have chosen him just from the initial introduction I got of the horses. It would be easy to lie now and say I had...but as the race began and he came up from last, no equine lover could help but fall in love with a horse that had that much heart.  I remember the tears in my eyes and the lump in my throat as he passed one horse then another and then gained ground with great strides. And then how at last he ran up alongside the front runner! Then, as if that were not enough, not only did he pass the leader but got two and a half lengths ahead!! He broke the record for running the 1&1/4 ml long race in under 2 minutes (1 minute and 59 2/5) that day and caused everyone to sit up and take notice! And I knew that I wanted to watch him run (and win) in the Preakness and the Belmont after that. And he did! (Of course he did!)
Which is why... I am so excited about the coming week. Not that every Kentucky Derby is as exciting as the one that was raced by Big Red (or even Seattle Slew or Affirmed after him.) No, but there is the potential! And I am always excited to think that maybe this year we will see another horse that will take wing and fly under the finish line, carrying our hopes and dreams with him-- like The Black Stallion.
If you want to participate in some pre-Kentucky Derby fun... head over to Lisa M Pott's Blog to catch up on all the traditions and fabulous fun she will post this week. It's too late to join the Kentucky Derby Contest of Awesome (not done intentionally since I've had a link all week and you've obviously not paid proper attention!!!) but not too late to have tons of awesome fun!!!

Posted by Danette at 8:44 PM 3 comments: Links to this post